They say the non-invasive device, dubbed the sKan, diagnoses melanoma by monitoring the heat emissions of various cells. The students were all part of the electrical biomedical engineering program at McMaster University 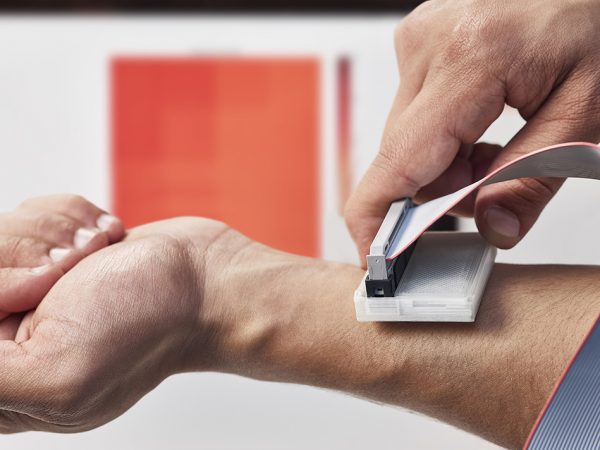 The sKan assists physicians and the average person in detecting melanoma by creating a thermal map on the region of interest on the skin. PHOTO: McMaster University

TORONTO—A group of four McMaster University students has won a $50,000 prize to develop their idea for a handheld device that detects skin cancer.

The recent grads—all students in electrical biomedical engineering at the Hamilton, Ont. university—earned the International James Dyson Award for their final year project, called The sKan.

They say the non-invasive device can diagnose melanoma by monitoring the heat emissions of various cells.

The heat map it creates shows which cells recover more quickly from thermal shock, indicating the presence of skin cancer.

Takla and Fadiya say they will use the prize money to refine their device and work toward clinical trials.

“This whole experience has been kind of unreal,” says Takla, now working for Ontario Power Generation in the Niagara Region as an electrical engineer.

“Just hearing that we won kind of gives us a lot of validation, let’s us know that we’re on the right track.”

The team’s British benefactor James Dyson, best known for inventing a bagless vacuum, says in a statement that he chose the sKan because of its “potential to save lives around the world.”

Early diagnostic methods for melanoma rely heavily on visual inspections, which can be inaccurate.

“I think the opportunities are endless when you look ahead, and I can’t wait to explore the various ways we can take this forward,” says Fadiya, born in Nigeria and raised in Barrie, Ont.

He’d like to begin preclinical studies in the next six to eight months, but says seeking approval for possible use in homes or hospitals is still years away.

The device beat out rivals including a robotic arm from Italy that is able to print 3D objects, and a German device that makes it easier to puncture veins with a catheter on the first try.

This is the second time in the prize’s 13-year history that a Canadian team has earned the top spot.

In 2015, a team of University of Waterloo students developed Voltera V-One, a circuit board printer that can create boards in minutes.

It also follows a national prize for a team from the University of Toronto. Robert Brooks and Justin Wee were recognized for developing a surgical instrument add-on that measures forces exerted on tissue from minimally invasive surgery. They won $3,400 from Dyson in September.