Lights out: Eclipse to have big impact on California power

The West Coast state has enough solar panels to power a large city, but for about three hours today, the sun won't be co-operating 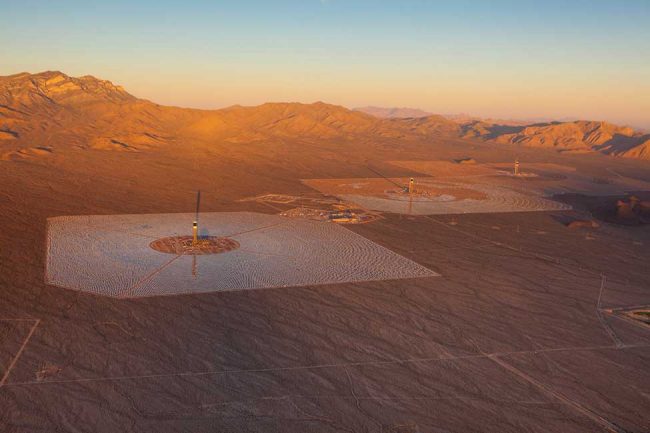 The 392-megawatt Ivanpah Solar Electric Generating Station is one of many California solar plants. PHOTO: Bechtel

SACRAMENTO, Calif.—When the moon passes in front of the sun during Monday’s eclipse California will lose enough solar energy to power more than 1.5 million homes, a figure that underscores the state’s growing reliance on energy from the sun.

California has rapidly deployed renewable energy and now produces 40 per cent of the nation’s solar power. The eclipse presents an unusual challenge for those who manage the state’s power grid because the solar energy will drop off and re-emerge more quickly than during usual conditions involving clouds or nightfall.

For about three hours Aug. 21, there will be diminished solar power available.

Grid managers say they’ve been preparing extensively for more than a year and are confident nobody will lose power. They’ll ramp up other sources of power, mainly hydroelectric and natural gas, as the sky darkens and ramp them back down as the sun re-emerges.

“Our grid operators are going to be functioning very similar to a director of an orchestra, trying to keep everything flowing,” said Lynsey Paulo, a spokeswoman for Pacific Gas & Electric, which serves electric customers in Central and Northern California.

The grid requires power supply and demand to match precisely. Grid managers now have years of experience adjusting power sources when clouds and gusts affect solar and wind energy, which are much less predictable than a solar eclipse.

During the eclipse, however, the sky will darken and lighten two or three times as fast as a usual, according to the California Independent System Operator, which runs the grid for most of California and a small portion of Nevada.

Solar energy now makes up only about 1 per cent of the U.S. power supply, but it’s far higher in some areas. On Monday morning solar supplied about 30 per cent of the power for the California ISO, said Deane Lyon, a shift manager. Solar’s precise share fluctuates constantly based on weather and demand.

California ISO projects it will need to replace just over 6,000 megawatts of capacity during the peak of the eclipse, about two-thirds from lost production at commercial solar farms and the rest due to higher demand from people and businesses that would otherwise draw from rooftop solar panels. The Solar Energy Industry Association says California solar panels produce enough energy to power 258 homes on average.

Other areas of the country also will take a hit, albeit a smaller one. PJM Interconnection, the nation’s largest grid operator which manages the power supply in 13 Eastern states and Washington, D.C., anticipates replacing up to 2,500 megawatts of solar capacity.

The biggest impact will be in North Carolina and New Jersey, the Eastern states with the most solar energy, company officials say.

Xcel Energy, which manages more than 1,000 megawatts of solar capacity in Minnesota, Colorado and New Mexico, said the company was planning for the eclipse the same way it does for a storm or cloud cover. Officials said there would be no impact on electric service.

Grid managers have caught a few breaks. The vast majority of the nation’s solar panels are outside the “path of totality” where the sun will be completely obscured, so most solar panels will lose some but not all of their energy source. And in the West, the region most reliant on solar energy, the eclipse will pass in the morning, a period of relatively low energy demand.

Still, California regulators are asking people and businesses to conserve power during the eclipse to reduce the need for power from fossil fuels that release greenhouse gases.

Many states are adopting renewable portfolio standards that require an increasing share of energy to come from wind, solar, hydroelectric and other power sources that don’t use fossil fuels. California requires utilities to get a third of their energy from renewables by 2020 and half by 2030. Hawaii has set a goal of reaching 100 per cent renewables by 2045.

The eclipse highlights the need for energy storage technology to balance the fluctuations in supply that come with renewable energy, said Daniel Kammen, professor and chair of the Energy & Resources Group at the University of California, Berkeley.

“It’s building us toward a point where we can run the economy off renewable energy and store the excess in a diverse range of batteries,” Kammen said.

The last total solar eclipse in the United States was in 1979, before solar power was connected to the country’s power grid.