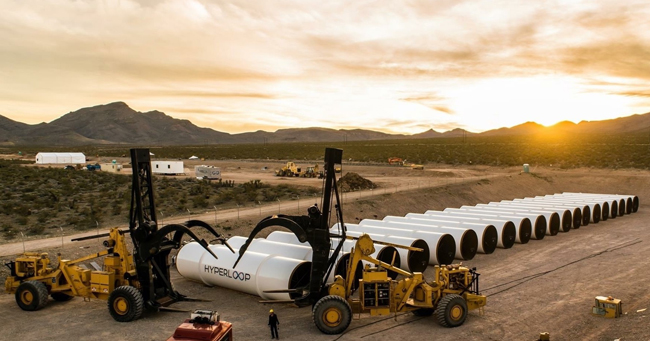 Re-branded as Hyperloop One to differentiate itself from rivals, the company performed a high-speed demonstration at its test site at the Apex Industrial Park north of Las Vegas. PHOTO: Hyperloop One

LAS VEGAS—A low-profile block of aluminum zipped across a short stretch of what looked like railroad tracks May 12 before crashing into a tuft of sand and sending a small cloud into the clear skies of the desert north of Las Vegas.

The seconds-long demonstration by startup Hyperloop One marked the first public glimpse of a propulsion system that its creators hope will rocket people and cargo through tubes at the speed of sound in five years.

It took place as hundreds of journalists and investors watched from grandstands about 50 yards away after being bused to the site from a swanky casino.

Executives with the Los Angeles-based company said the system could whisk people the 350 miles from Los Angeles to San Francisco in 30 minutes.

They described a future where there’s no such thing as a long-distance relationship, and it doesn’t matter where you live because the commute to work would be so quick.

They say the tubes could run underground—a safe alternative to highway crossings and inclement weather.

The propulsion technology involves levitating pods that use electricity and magnets to move through a low-friction environment at more than 700 mph.

The idea was first articulated in a paper by Tesla co-founder Elon Musk in 2013. Musk was busy building his electric car and rooftop solar companies at the time, and offered the idea to whoever wanted to try it out.

The idea has skeptics, including professor James Moore II, director of the University of Southern California’s Transportation Engineering Program.

He credited Musk for the new idea on how to move objects through tubes but said backers would face myriad public policy issues before it’s installed on a large scale, including questions about safety, financing and land ownership.

Such roadblocks are keeping self-driving vehicles off the road decades after the idea was born, he said.

“I would certainly not say nothing will come of hyperloop technology,” Moore said. “But I doubt this specific piece of technology will have a dramatic effect on how we move people and goods in the near term.”

Hyperloop One hopes to start moving cargo by 2019 and people by 2021. It announced Tuesday that it had completed another $80 million round of financing and was partnering with firms including GE and SNCF, the French national railway company.

Hyperloop One secured land in December in North Las Vegas to test the technology in a desert industrial park and will receive $9 million in state tax breaks for its investments in the state.

Watch the brief test of the company’s propulsion system: