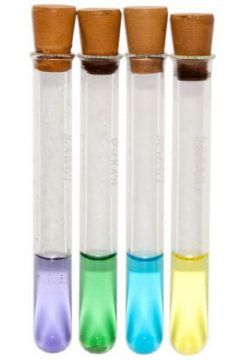 Vials of vanadium electrolyte in its four separate states. Vanadium redox batteries charge or discharge through a reversible chemical reaction as electrolyte is circulated between tanks

OTTAWA—Canada’s National Research Council is investigating what role Canada could play in the relatively obscure, but growing market for vanadium.

The federal research and development agency announced earlier this month it is working on a vanadium market assessment that will explore how the country could become a producer and supplier of high purity vanadium pentoxide (V2O5). The research was prompted by the enormous anticipated growth in the energy storage market and the potential of vanadium redox flow batteries (VRFB) to supplant traditional battery choices, such as lithium-ion.

Currently, more than half of the world’s V2O5 is produced in China, with South Africa and Russia producing 17 and eight per cent respectively; only about five per cent comes from North America.

Meanwhile, the vast majority of the V2O5 produced is used in the steel industry.

With the emergence of VRFBs, however, both the steel industry’s dominance over the market and the lack of a major North American producer could be poised to change.

The battery technology, which uses liquid electrolyte, offers a handful of advantages over traditional solid batteries, particularly for grid-scale applications. Producers still need to bring V2O5 costs down considerably to make the storage solution cost-competitive, according to NRC.

While vanadium pentoxide can be mined, produced during steel manufacturing or from catalysts, ash and other residues, there is currently no primary producer of the compound in Canada.

Quebec’s VanadiumCorp Resource Inc. is one example of a Canadian company developing a production site; it is currently working to secure financing to start construction on a mine outside Chibougamau, Que.

NRC plans to release the preliminary findings of its vanadium assessment later this month.