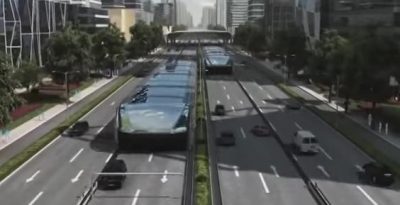 The new bus design would let cars pass under the vehicles even as they made stops, eliminating a significant strain on city streets, and potentially, the environment. PHOTO: New China TV/YouTube

BEIJING—A Chinese company has re-imagined the traditional city bus as it looks to combat worsening emissions and crippling traffic congestion in cities across China.

Unveiling the unique design at the China Beijing International High-Tech Expo last week, China TBS Ltd. said the “land airbus” incorporates many of the advantages of subway systems, but can be built at a fraction of the cost because it uses mostly existing infrastructure.

Stretching as long as 60 metres (197 feet), the massive vehicles would operate on specially-designed rail tracks and sit above the road on a pair of stilts, allowing cars as high as 2.1 metres to travel under them, according to Chinese state media agency Xinhua. In addition to eliminating the need for buses and cars to share the road, the design would cut congestion by allowing traffic to continue to flow even as the buses make frequent stops, as well as reducing idling-relating emissions. The Chinese firm said the preliminary design for the “straddling bus” can carry as many as 1,400 passengers and travel at up to 60 km/h.

The company’s chief engineer, Song Youzhou, told Xinhua that the buses, which run on electricity and operate more like trams or streetcars than traditional buses, can be built quicker than subways and at 16 per cent the cost. Being connected to the electrical grid would also greatly reduce emissions compared to traditional gas or diesel buses—assuming the grid generates power without relying on fossil fuels.

The company plans to launch a demonstration project for the new technology later this year in the northeastern Chinese city of Qinhuangdao.

Watch how the new technology could cut gridlock and emissions: