Canada may be losing its status as a top global destination for new medicine launches: report

The report shows that among 37 new therapies launched globally in 2018, over half of them were not launched in Canada 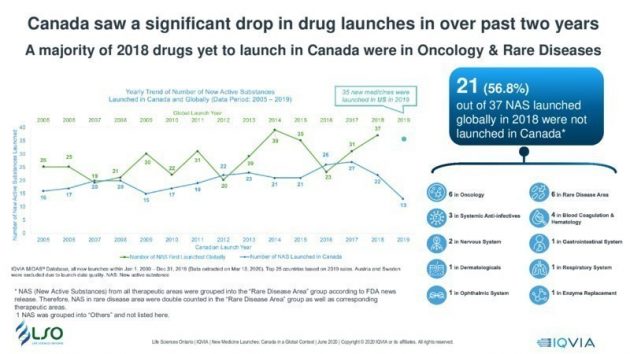 LSO commissioned IQVIA Inc., a health data and analytics firm, to examine the commercialization of new medicines in Canada and other top global jurisdictions from the past 20 years (2000 to 2019). The report shows that Canada has been a top destination for new medicine launches over the past 20 years and has steadily improved its global standing over time.

Up until 2018, Canada was gradually getting faster and more extensive access to therapies relative to other countries.

However, the research shows a sharp decline in the number of new drug launches in Canada in 2019, from 22 in 2018 to just 13 in 2019, despite the overall number of global launches rising during the year. In the last quarter of 2019, there was only one new drug launch in Canada.

This report substantiates concerns raised by Canadian and global life sciences leaders in a survey commissioned by Life Sciences Ontario earlier this year to help measure the impacts of the federal government’s new price controls for patented medicines in Canada. The survey revealed unanimity on the expected negative impacts of the changes, including delayed medicine launches in Canada.

“This new research shows that Canadian patients have been benefiting over recent years from new treatments being made available in Canada almost as quickly as anywhere else in the world but that we are throwing away this advantage in a short-sighted attempt to lower drug prices at unreasonably low levels,” said Jason Field, president and CEO of Life Sciences Ontario, in a prepared statement. “And we are doing this at a critical time where Canadians need access to new medicines and vaccines, especially to combat COVID-19.”

The report shows that among 37 new therapies launched globally in 2018, over half of them (21) were not launched in Canada. The majority of the medicines not commercialized in Canada were for rare diseases and cancer.

Field supports the government’s decision to delay implementation of the federal regulations as an opportunity to revisit the policy, noting that “we hope the federal government will revise the regulations to ensure Canadians don’t suffer further from delayed or lack of access to new treatments and vaccines.”