The B.C.-based company, alongside cleantech firm Nisshinbo Holdings, has designed a catalyst for its fuel cells made of carbon alloy instead of platinum, significantly reducing production costs 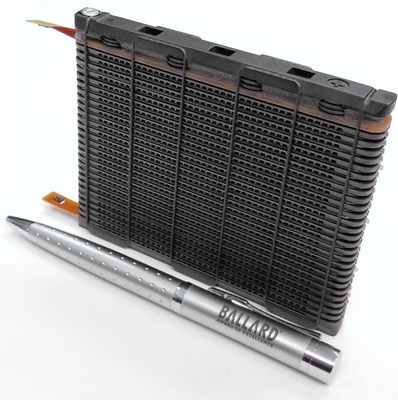 Proton exchange membrane fuel cells are high efficiency power sources used in vehicles and portable power and backup power applications. These fuel cells produce electricity by splitting hydrogen into protons and electrons, but until now, the catalyst for this process has been platinum—a costly precious metal that props up the price of the technology.

Last week however, Ballard and Nisshinbo unveiled a newly-developed Non Precious Metal Catalyst (NPMC) based on a carbon alloy material for use in PEM fuel cells.

The B.C.-based company plans to launch a 30-watt FCgen-1040 fuel cell stack, which incorporates the cheaper catalyst, for commercial use in late 2017.

The new fuel cell will be an NPMC variant of Ballard’s FCgen-micro fuel cell stack, an existing air-cooled product designed for integration into portable applications: such as laptop and cell phone chargers and military devices.

The amount of platinum catalyst-coated material used in fuel cells, known as platinum loading, has been successfully reduced over time, but Ballard says platinum still accounts for 10 to 15 per cent of the cost of a fuel cell stack today.

The company asserts its new design will cut these costs dramatically, reducing the amount of platinum needed in an air-cooled fuel cell stack by more than 80 per cent.

“We are starting a program to assess the potential incorporation of Non Precious Metal Catalyst technology into our existing FCgen-1020 air-cooled stack as well as our next-generation liquid-cooled stack,” said Kevin Colbow, Ballard’s vice president, Technology and Product Development.

“Both air-cooled and liquid-cooled fuel cell stacks are used to power forklift equipment in the field,” Colbow added. “Our goal is to ultimately implement lower-cost NPMC-based air-cooled and liquid-cooled stacks into certain mobility applications, with an initial focus on the material handling space, where blue-chip brands such as Walmart and Amazon have demonstrated the strong value proposition offered by current fuel cell-powered forklift trucks operating in high throughput distribution centre environments.”

In addition to exploring the use of NPMC fuel cells in forklifts, Ballard says it is working to penetrate the Japanese hydrogen economy with the help of Nisshinbo and other partners. Nisshinbo has supplied Ballard with the carbon plates used in the construction of PEM fuel cells for over 20 years, and in November 2015, it became a strategic equity investor in Ballard.

Investors, meanwhile, sent shares of the Canadian cleantech firm soaring as a result of the breakthrough. Since Ballard announced the cheaper catalyst last week, the company’s shares are trading up nearly 25 per cent.