A new technique developed at UBC Okanagan speeds up methane production in bioreactors, slashing production times by up to 172 per cent 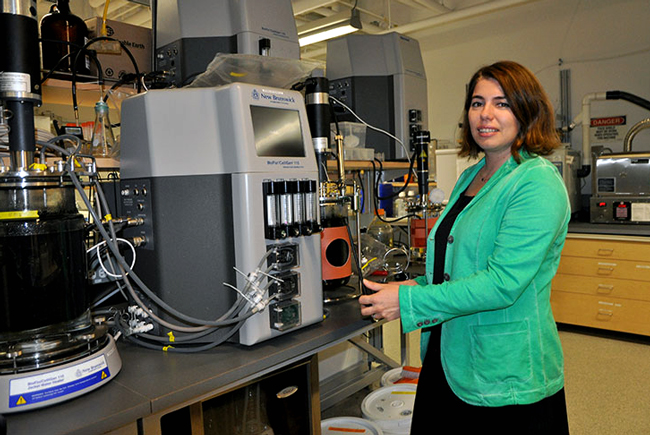 A team of researchers, including Cigdem Eskicioglu, an associate professor of engineering at UBC’s Okanagan Campus, say the method for pretreating biomass increases methane production in bioreactors by up to 172 per cent and could lead to cheaper and safer biofuels.

“The potential to more efficiently harness the energy from forestry waste products like tree bark can open a world of new opportunities,” said Eskicioglu, who is working with several collaborators in Europe and Australia on the project. “Our new fermentation process would be relatively easy to implement on site and because the bioreactors can be much smaller, the costs can be kept low.”

Methane is the main component of natural gas and is commonly used to produce electricity in the power industry. Along with extracting it from gas fields, it can be produced by fermenting organic material.

Eskicioglu, the lead author of an upcoming paper on the development, said the new process—known as hydrothermal pretreatment—involves treating organic material with carbon dioxide at high temperatures and pressures before the mixture enters the fermentation stage.

Unlike traditional methods for pretreating biomass, Eskicioglu said the new technique does not require or generate any toxic chemicals, which could make could make methane production safer.

The process ranges in effectiveness depending on what type of biomass is used. Eskicioglu said refractory materials, such pine residues, produce the best results. Douglas fir bark, for instance, was shown to produce methane 172 per cent faster than previous attempts.

“We still have some work to do to move it to an industrial scale, but our results so far are very promising,” she added.

The paper is set to be published in September’s edition of the journal Water Research.