A dark matter of fact: Canadian telescope to unlock the secrets of the universe

CHIME, a revolutionary new telescope located near Penticton, B.C, will allow scientists to study deep space using radio waves. The $16-million project is a collaboration between the federal government and Canadian universities 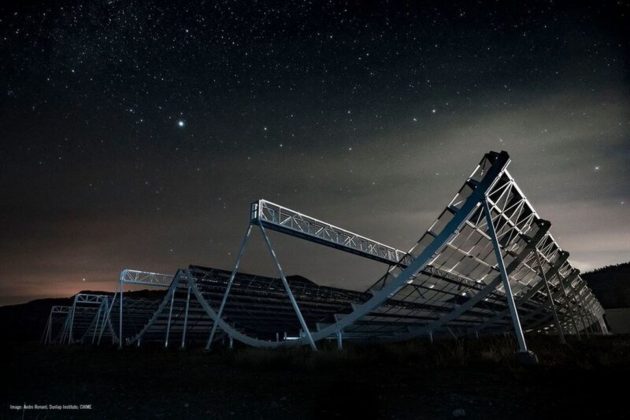 CHIME differs from traditional telescopes in that it has no moving parts. The colossal instrument takes up an area the size of five NHL hockey rinks. PHOTO: Andre Renard, Dunlap Institute of Astronomy & Astrophysics, University of Toronto

KALEDEN, B.C.—The final piece of a new state-of-the-art telescope was installed September 7 near Penticton, B.C., an instrument that the National Research Council of Canada (NRC) says will allow scientists to create a three-dimensional map of the universe extending deep into both time and space.

The Canadian Hydrogen Intensity Mapping Experiment, known as CHIME, is described as an extraordinarily powerful telescope, and is expected to help scientists better understand the history of the universe, the nature of distant stars and the detection of gravitational waves.

The $16-million investment for CHIME was provided by the Canada Foundation for Innovation and the governments of British Columbia, Ontario and Quebec, with additional funding from the Natural Sciences and Engineering Research Council and the Canadian Institute for Advanced Research.

“CHIME is an extraordinary example showcasing Canada’s leadership in space science and engineering. The new telescope will be a destination for astronomers from around the world who will work with their Canadian counterparts to answer some of the most profound questions about space. Our government believes in providing scientists with the opportunities and tools they need to pursue the answers to questions that keep them up at night,” said Kirsty Duncan, federal minister of Science.

CHIME is one of the largest astronomical research instruments in the world, located at the NRC’s Dominion Radio Astrophysical Observatory, in the mountains of B.C.’s Okanagan Valley.

By using the telescope to measure the composition of dark energy—a mysterious entity that counteracts gravity and pushes matter apart, responsible for the rapid expansion of the universe—scientists hope to comprehend the shape, structure and fate of the universe.

CHIME will also be an important instrument to study gravitational waves, ripples in space-time that were recently discovered and that confirm the final piece of Einstein’s theory of general relativity, as well as fast radio bursts, fleeting but powerful bursts of radio wave emission coming from deep space—the source of which remains a mystery.

This instrument differs from traditional telescopes in that it does not use a dish and has no moving parts. Dish satellites are ideal to zoom in on a small region of the sky to study a specific object, but CHIME connects the spaces between objects to create what researchers associated with the project call a more complete map of the sky.

The telescope maps the sky by collecting cosmic radio waves, similar to the wavelengths used by cell phones. Radio waves are a form of non-visible light, and by processing radio waves scientists can visualize the deepest recesses of the universe. If a faraway galaxy is emitting radio waves that hit CHIME’s detectors, the telescope’s processors can reconstruct the path of the waves to determine the location of the galaxy.

The radio signal from the universe is very weak and extreme sensitivity is needed to detect it. The amount of energy collected by CHIME in one year is equivalent to the amount of energy gained by a paper clip falling off a desk to the floor.

Despite the weakness of the signals the telescope is processing, the immensity of the information it collects from across the universe and the efficiency with which CHIME processes it is impressive.

The data rate passing through the instrument is comparable to all the data in the world’s mobile networks, and to accommodate this, seven quadrillion computer operations occur every second on CHIME. This rate is equivalent to every person on Earth performing one million multiplication problems every second.

“CHIME ‘sees’ in a fundamentally different way from other telescopes. A massive supercomputer is used to process incoming radio light and digitally piece together an image of the radio sky. All that computing power also lets us do things that were previously impossible: we can look in many directions at once, run several experiments in parallel and leverage the power of this new instrument in unprecedented ways,” said Dr. Keith Vanderlinde, University of Toronto.