Pepper weevils destroyed $83 million in crops in 2016, but researchers are hoping Colbat-60, a nuclear isotope, can sterilize the ruinous insects and put a dent in their population 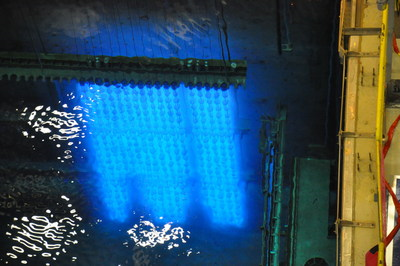 Cobalt-60 is an isotope that emits gamma rays essential to the medical community for cancer treatments and the sterilization of medical devices. It also helps to control pest populations through an insect sterilization technique. PHOTO: Bruce Power

Pepper weevils can burrow into farmed peppers and destroy them from the inside, and according to the Ontario Greenhouse Vegetable Growers, they ruined $83 million worth of crops in 2016—a figure that does not include the costs of management, suppression initiatives or cleanup.

Nuclear energy provider Bruce Power, Ottawa-based health science company Nordion and the University of Guelph (U of G) are teaming up to reduce the population of these pesky creatures.

Nordion and Bruce Power are funding and supporting a multi-year U of G study on sterilizing pepper weevils using Cobalt-60, a synthetic radioactive isotope.

Cobalt-60 is used for the Sterile Insect Technique (SIT), which could be a powerful strategy for controlling the weevil.

“We want to move away from insecticide as much as possible, and SIT provides us another tool in our pest management toolbox,” said U of G Professor Cynthia Scott-Dupree, who is leading the project.

Scott-Dupree continued, “It fits well with biological control programs that growers already have established in their greenhouses. While no strategy is 100 per cent effective, using nuclear energy to sterilize insects is an environmentally friendly method of controlling these pests. There is no danger of the pepper weevils spreading any radiation following sterilization, so it is also safe for people.”

Gamma radiation from Cobalt-60 will sterilize the insects before they are released to mate normal, unsterilized pepper weevils in greenhouses.

“We will only release pepper weevils that have all the attributes of normal, unsterilized weevils, except that they are sterile,” said Scott-Dupree. “When they mate, the eggs will not be viable, no progeny results and the pest population will decrease.”

Pioneered in the 1950s, SIT has been successfully used to control the codling moth, a pest of apples, in the Okanagan Valley in B.C. since 1992. Scott-Dupree has also recently conducted research which has found that SIT has potential to control American serpentine leafminer, an insect pest that feeds primarily on chrysanthemums.

“This innovative research could improve Ontario’s agricultural sector by reducing the impact of pests on produce, while also providing a possible gateway to the future of farming,” said Mike Rencheck, Bruce Power’s president and CEO.