‘You need to stand with your leader:’ Ford rallies federal Tories in Halifax

The Ontario premier delivered a rousing speech at the national Conservative convention, drawing on his own recent electoral success to inspire his federal colleagues 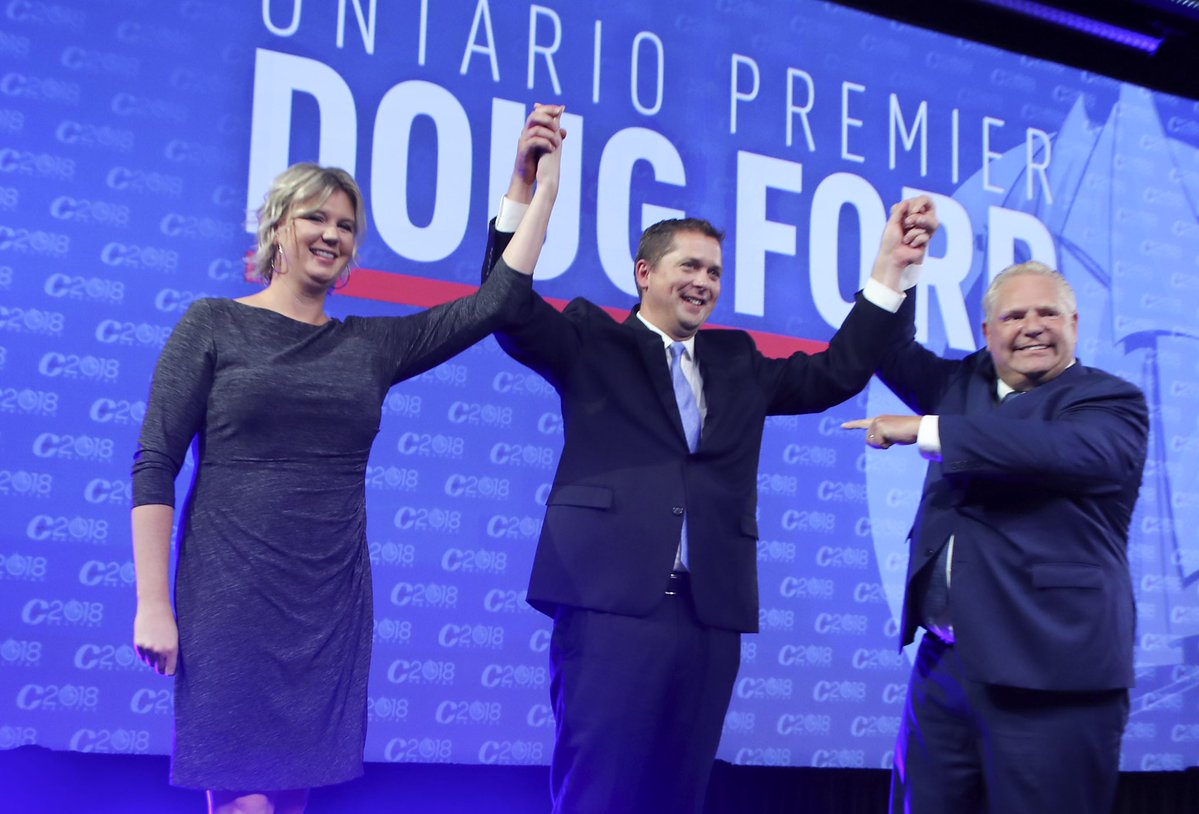 As Doug Ford’s speech drew to a close, Andrew Scheer and his wife Jill joined the Ontario premier on stage. PHOTO: Doug Ford/Twitter

Speaking to a room filled with thousands of Conservative delegates and members from across the country, Ford boasted of his recent electoral success in Ontario, which he said can also happen for the federal party in 2019—if members remain united behind Scheer.

“My friends, it will not come easy. It will take effort and discipline. And most importantly, you will need to stand together and you need to stand with your leader,” Ford said, eliciting a standing ovation from the crowd.

Earlier in the day, Scheer sustained a searing attack from his former leadership rival, Quebec MP Maxime Bernier, who announced he was quitting the Conservative party. In a scathing diatribe, Bernier called the Tories “intellectually and morally corrupt” and said a Scheer victory next year would lead to “a more moderate version of the disastrous Trudeau government.”

Related: A look at Maxime Bernier’s musings, headlines over the last 10 years

Ford did not mention Bernier in his remarks, instead focusing his comments on praising Scheer and lending his personal slogan, “Help is on the way” to the federal party.

Brandishing his signature oratory cadence, Ford repeated many of his own oft-used electoral slogans to get the Halifax crowd on their feet—and jump to their feet they did.

Ford reiterated his vow to fight Prime Minister Justin Trudeau’s “punishing carbon tax” using every tool at his disposal. He also said he has been “burning up the phone lines” talking to U.S. governors to help get a deal on NAFTA.

But his speech was aimed mainly at offering hope and advice to federal delegates, offering his own recent electoral victory as an example to remain firm in their convictions that victory is possible.

“As you look towards the upcoming campaign, please remember we won in Ontario because we listened to the people and because we stayed true to our principles,” said Ford.

“And you can do it too with a great leader and future prime minister, Andrew Scheer.”

As Ford’s speech drew to a close, Scheer and his wife Jill joined the Ontario premier on stage, where they hoisted their hands together in the air, officially kicking off the three-day Conservative convention in Halifax.