by Allison Jones and Paola Loriggio, The Associated Press  May 10, 2018

On the first day of Ontario's election campaign, the Liberal premier campaigned in rival Doug Ford's home neighborhood of Etobicoke, promoting her "care, not cuts" philosophy 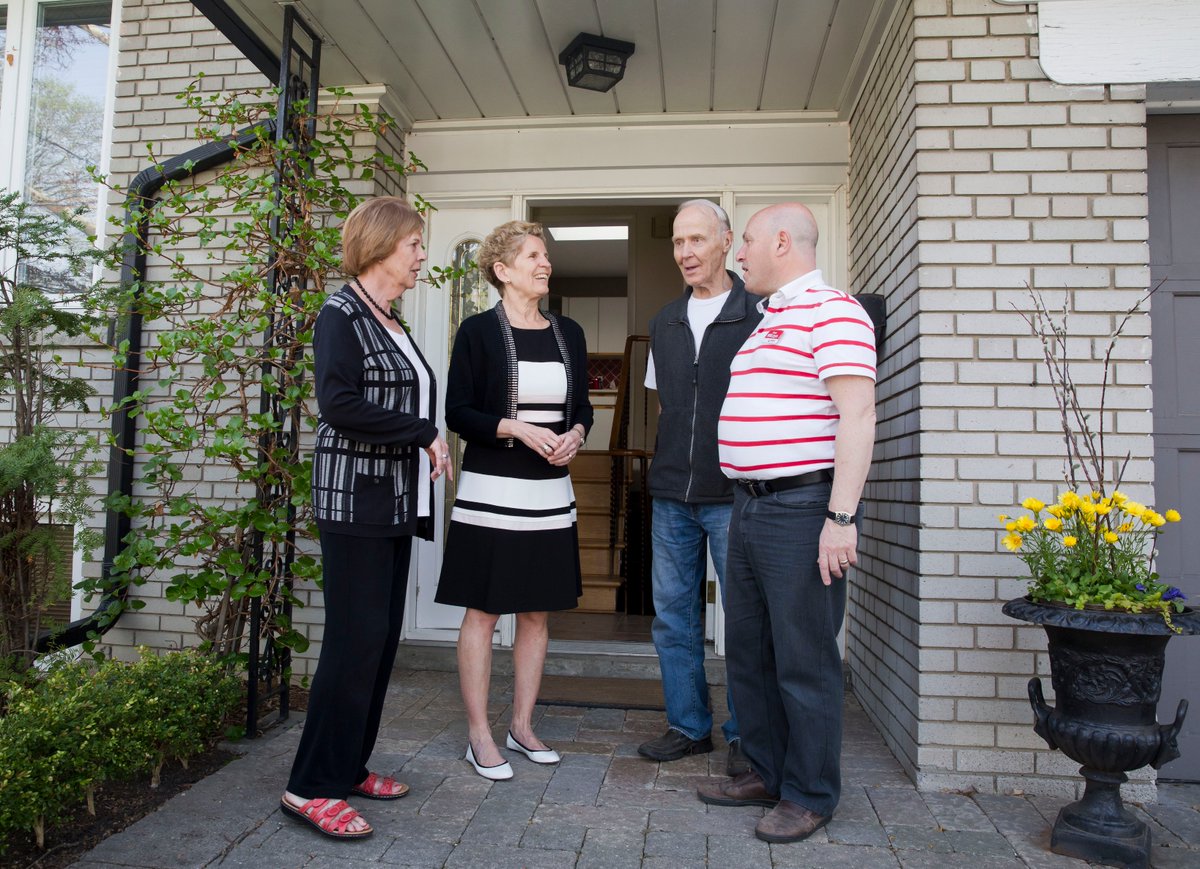 TORONTO—The first day of Ontario’s election campaign saw the Liberal premier venture into the heart of Doug Ford’s suburban territory to squarely take aim at her Tory rival, while he tried to woo urban voters with transit promises.

Kathleen Wynne has framed the election as a stark choice between her plan and that of Ford, who polls suggest is the one to beat.

Her main campaign slogan of “care, not cuts” is a dig at the Tories—both the Liberals and NDP suggest a Ford government would slash public services in order to meet a promise of finding $6 billion in “efficiencies.”

Wynne’s first campaign stop on Wednesday was in the west Toronto area of Etobicoke, the home of Ford and his late brother, former Toronto mayor Rob Ford.

The Liberal leader, whose party has been in power for 15 years, stood behind a “care, not cuts” sign and reannounced a pledge that was in her government’s last budget, to give seniors a $750-per-year benefit for maintenance costs that help them stay in their homes longer.

“It’s part of a broader care plan that we have put forward and it is a stark contrast with what Doug Ford is proposing, because what he has said is that he is going to cut across government,” she said.

“He has said that these are efficiencies that he’s going to find. The reality is that’s $6 billion across the services that people need and access, that means $6 billion that will not be available to provide those services.”

Ford, meanwhile, used his first day on the campaign trail to pledge a new $5 billion for subways in Toronto, as well as support for two-way, all-day GO Transit service to Niagara and Phase 2 of the Ottawa LRT, as well as regional transit projects in Mississauga, Brampton, Hamilton, London and Kitchener-Waterloo.

Ford also shrugged off the significance of Wynne campaigning in Etobicoke, but echoed her stark contrast line.

“People are going to have a very clear choice by the time we’re done,” he said.

“We can either continue the reckless spending under Kathleen Wynne and (NDP) Leader Andrea Horwath—they’re the same people, you know what I mean? They just want to spend and tax we’re actually going to put money back into the taxpayers’ pocket.”

Wynne, who has taken the Liberals in a decidedly leftward direction in recent years, herself suggested there is not a lot of daylight between her plan and that of the NDP.

“There’s a lot of similarity in terms of direction between what we’re putting forward and what the NDP is putting forward,” she said. “The difference is that we actually have laid out how we would do the things that they would do, how we would pay for them, what the impacts would be and in many cases that’s not the case with the NDP.”

Horwath spoke about her health-care plan Wednesday, which includes an immediate $1.2 billion for hospitals and $19 billion for building expansions, as well as universal dental care and pharmacare, and hiring at least 2,600 new mental health and addictions professionals.

“I think people are looking for change this election,” she said after her health-care event. “And that means that by definition that Kathleen Wynne and the Liberals are not going to be forming government come June 7. But people have an important choice to make. What we’re here to say is you don’t have to go from bad to worse.”

Meanwhile, Dr. Merrilee Fullerton, a physician and Tory candidate in the Ottawa region, came under fire from the Liberals over comments they say suggest she would support a two-tier health-care system.

On Twitter, Fullerton has repeatedly touted what she calls a hybrid public-private system, arguing that allowing wealthier people to pay for private care would ease the burden on the public system.

“Private options for medical care are necessary to address the services needed. Single payer is unable to meet demand,” she wrote in May 2015.

When asked to clarify her stance, Fullerton said in an email that she has “always supported universal health care and will continue to do so.”

During a whistle stop in the rural Ottawa suburb of Carp, Ford told reporters he is fully committed to the province’s health-care system, but did not comment directly on Fullerton’s tweets.

“She believes in public health care,” said Ford, who chalked the whole issue up to “Liberals playing politics.”

A group of about 60 supporters gathered at the small cafe where the PC campaign bus stopped in Carp, most of them staunch supporters of Ford and his populist message.

Many identified as party members or supporters, and several said they had become disenchanted with the Tories until Ford came along.

—with files from Liam Casey, Shawn Jeffords and Teresa Wright