by Julie Bykowicz And Jonathan Lemire, The Associated Press  August 17, 2017

Publicly criticizing the president and resigning from his councils is a significant step for big-name corporate leaders, and highlights the severity of Trump's missteps thus far 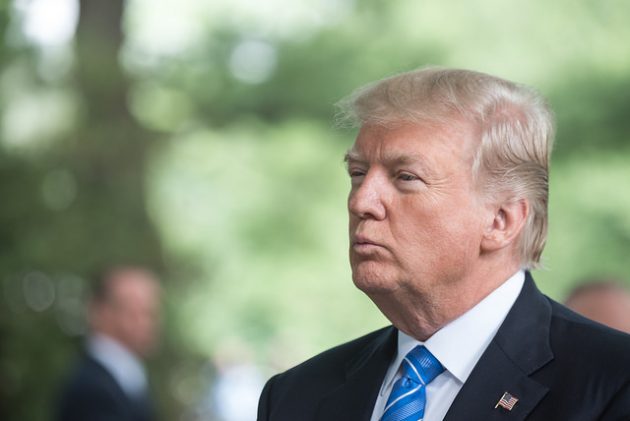 The president attempted to make it appear it was his choice to disband his advisory councils, though the announcement came only after seven executives tendered resignations. PHOTO: Chairman of the Joint Chiefs of Staff/Flickr

“Rather than putting pressure on the businesspeople of the Manufacturing Council & Strategy & Policy Forum, I am ending both. Thank you all!” Trump tweeted from New York.

However, it seems Trump only made the decision after after one of the panels had already agreed to disband earlier in the day, and even more CEOs quit the other panel.

Members of the Strategy and Policy group, led by Blackstone CEO Stephen Schwarzman, concluded after a 45-minute conference call in the morning that they would end the council and announce their decision in a statement, according to two people familiar with the discussions. They insisted on anonymity to discuss private conversations.

In a subsequent call with Trump, the president agreed it was the right course of action. He tweeted before they could announce the decision they’d reached—attempting to make it appear it was his choice.

Before the announcement to disband the councils, the CEO of Campbell Soup joined the list of business elite that quit a White House jobs panel over comments about racism made by President Donald Trump.

Campbell CEO Denise Morrison said in a company release: “Racism and murder are unequivocally reprehensible and are not morally equivalent to anything else that happened in Charlottesville. I believe the president should have been—and still needs to be—unambiguous on that point.”

Her remarks are related to Trump’s Aug. 15 statement that the white supremacists and counterprotesters were both blameworthy for violence that erupted this weekend in Virginia.

Morrison said the president’s comments triggered her resignation from the manufacturing jobs panel.

She is the seventh person to resign from two major advisory panels this week following Trump’s comments.

The chief executive of 3M also resigned from the president’s Manufacturing Jobs Initiative panel, saying it is no longer an effective forum for the company to advance its goals.

In a statement, Thulin says: “Sustainability, diversity and inclusion are my personal values and also fundamental to the 3M Vision. The past few months have provided me with an opportunity to reflect upon my commitment to these values.”

The White House is trying to deal with the repercussions from Trump’s defiant remarks on the Virginia tragedy. Presidential advisers hunkered down Wednesday, offering no public defence while privately expressing frustration with his comments.

Some Republicans and scores of Democrats denounced Trump’s statements as putting white supremacists on equal moral footing with counter-protesters in Charlottesville and called for an apology. Most of those Republicans, including congressional leaders, did not specifically criticize the president.

CEOs had begun tendering their resignations from White House panels after Trump’s initial comments following the Saturday violence. The first to step down, Kenneth Frazier of Merck, drew a Twitter tongue-lashing from the president. Later, Trump called those who were leaving “grandstanders” and insisted many others were eager to take their places.

Publicly criticizing the president and resigning from his councils is a significant step for big-name corporate leaders. Though the policy influence of such advisory groups is sometimes questionable, simply meeting with Trump with TV cameras going is valuable face-time for the executives—and for the president.
___


Related Stories
Trump freaks out as even more business leaders to quit President’s advisory council
Trump, cans of Campbell’s soup and the scramble for tariff exemptions
Intel chief the latest CEO to resign from Trump’s advisory board
Campbell Soup shuttering Toronto plant, 380 jobs to be lost