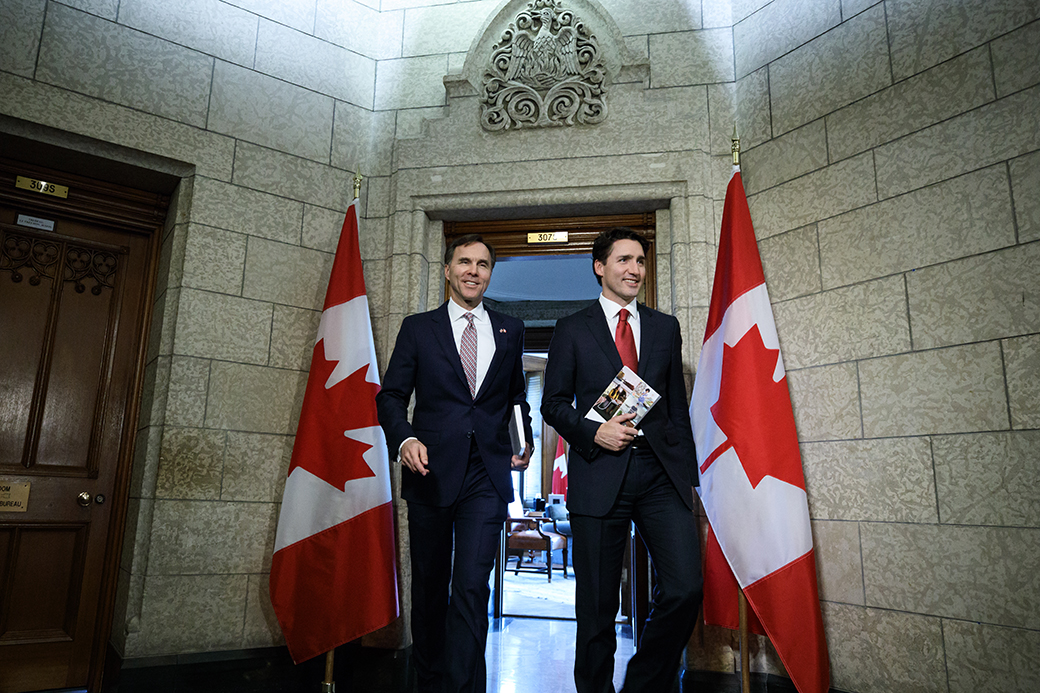 Prime Minister Trudeau speaks to Minister Morneau before the tabling of the new budget.

OTTAWA — Prime Minister Justin Trudeau tried Aug. 11 to shut down speculation that he’s about to fire his finance minister, saying he has full confidence in Bill Morneau and that any reports to the contrary are false.

Trudeau’s office took the unusual step of issuing a statement in support of Morneau as rumours about the minister’s imminent departure from the crucial finance post reached a fever pitch on Parliament Hill.

For several weeks, opposition parties have been calling for Morneau’s resignation over allegations that he had a conflict of interest in the WE Charity affair. Morneau and Trudeau are both facing investigations by the federal ethics watchdog.

But news this week that Mark Carney, a former governor of both the Bank of Canada and Bank of England, is helping to advise Trudeau on the post-pandemic economic recovery fuelled speculation that Morneau is about to be replaced as finance minister.

In the statement Aug. 11, the Prime Minister’s Office praised Morneau’s record, including his “lead role” in creating emergency aid programs to help individuals and businesses survive the economic shutdown triggered by the COVID-19 pandemic.

“Since we formed government, Minister Morneau has worked relentlessly with all his colleagues, and closely with the prime minister, to deliver critical support for Canadians to build a strong and resilient economy,” it said.

“In particular, Minister Morneau played a central role that saw Canada develop one of the best economies in the G7, a million new jobs over the first mandate, generational changes to the CPP, the lowest unemployment rate in Canadian history, and over a million Canadians lifted out of poverty.”

The statement said Morneau is continuing his important work of helping Canadians survive the economic impact of the pandemic.

Earlier Tuesday, Conservative Leader Andrew Scheer said it mattered little to him whether Morneau or someone else serves as finance minister under Trudeau.

“It really doesn’t matter, making a trade for Bill Morneau, when you’ve got a prime minister that has such a lack of ethics embroiled in so many scandals,” Scheer told reporters at a news conference in Ottawa.

Trudeau and Morneau are both under investigation by the federal ethics commissioner for possible conflicts of interest arising from the government’s decision to hand the administration of a student grant program to WE Charity.

Both have close family connections to the charity and have apologized for not recusing themselves from the decision. However, they’ve also insisted that it was public servants who recommended WE Charity as the only organization capable of managing the program, which has since been abandoned due to the controversy.

The government had budgeted $912 million for the program, which was supposed to encourage students to sign up for volunteer work related to the COVID-19 pandemic. The agreement to have WE Charity administer the program was for $543 million.

WE Charity was to be paid up to $43.5 million under the agreement, which stipulated that the organization could not make money on the deal.

Trudeau has been a featured speaker at six WE Day events and his wife hosts a podcast for the group, for which they have not been paid. However, the charity has covered hundreds of thousands in expenses for Sophie Gregoire Trudeau as well as fees and expenses to Trudeau’s mother and brother for speaking at numerous WE events over the years.

One of Morneau’s daughters works for the organization, another has spoken at its events and his wife has donated $100,000. Morneau also revealed last month that he had repaid some $41,000 in expenses that WE had paid for him and his family in 2017 for trips to view two of its humanitarian projects in Ecuador and Kenya.