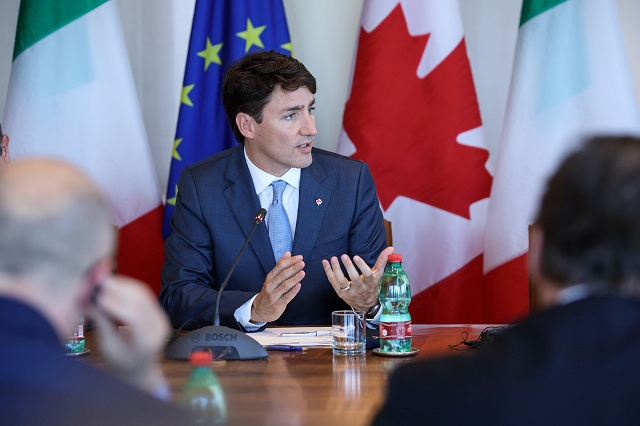 Trudeau is shaking up his cabinet. PHOTO: Government of Canada

OTTAWA – Prime Minister Justin Trudeau has unveiled his pre-election cabinet, shuffling six ministers to new portfolios and promoting five other MPs to his front benches in a bid to boost the profile of his team.

Montreal’s Melanie Joly, who has wrestled with the heritage portfolio, moves to tourism, official languages and la Francophonie as the prime minister readies his Quebec team at a volatile time for politics in the seat-rich province.

Trudeau aims to bolster Canada’s bid to diversify its trade interests beyond the United States by moving natural resources minister Jim Carr into the international trade portfolio. That means a new role for Francois-Philippe Champagne, who becomes minister of infrastructure.

Carr’s job will be to kickstart Canada’s stalled efforts towards a trade agreement with China, promoting the Canada-EU free trade agreement among European countries that have yet to ratify it and continuing to push for deeper economic integration into Latin America.

Amarjeet Sohi, who represents an Edmonton riding, moves from infrastructure to take over natural resources from Carr. The change puts the government’s contentious pipeline file in the hands of an Alberta minister.

Five Liberal MPs have been promoted to cabinet for the first time.

Rodriguez was first elected in 2004 before losing his seat in the 2011 election. He was re-elected to the House of Commons in 2015.

Blair, who has served as the Trudeau government’s parliamentary secretary on the complex issue of cannabis legalization, will continue his work on the pot file and be responsible for addressing gun violence. He also has duties related to the thorny issues of border management and irregular migration. Before entering politics, Blair worked for 39 years with the Toronto police and served as chief between 2005 and 2015.

Ng, a Toronto-area MP, has extensive experience in the Ontario public service and worked for Trudeau in the Prime Minister’s Office before her byelection win last year.

Tassi, a Hamilton MP, worked as a corporate lawyer and spent two decades as a chaplain at a local high school before winning her seat in 2015. She has been serving as deputy government whip.

Wilkinson, a Rhodes Scholar, has a background in the energy and environmental technology sectors. He had served as parliamentary secretary to Environment Minister Catherine McKenna.

In addition, Trudeau revamped the responsibilities of five existing ministers.

In his new role as intergovernmental affairs minister, LeBlanc will have to manage an increasingly complicated political landscape in the provinces for the federal Liberals.

A trusted communicator, LeBlanc will be tasked with overseeing what will likely be a bumpy relationship with Ontario’s recently elected Progressive Conservative government led by Premier Doug Ford.

Other provincial elections on the horizon—Quebec this fall and Alberta next spring—could produce governmental changes that create new challenges for the Trudeau government.