Trudeau must keep promise to support the West, Kenney and Moe say 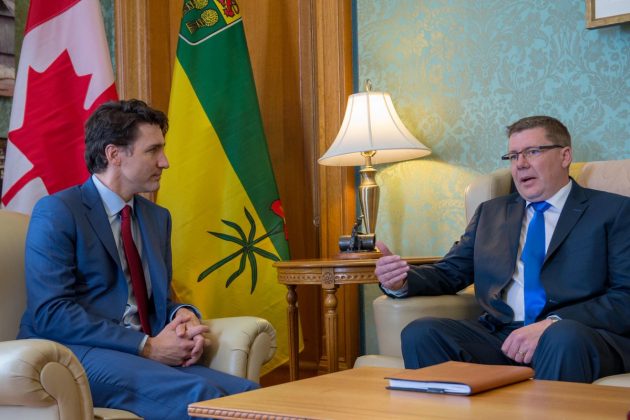 Prime Minister Justin Trudeau’s promise to support the West should be more than lip service or there will be lasting damage to national unity, say the premiers of the oil-producing Prairie provinces.

The federal Liberals secured a minority mandate in Monday’s federal election, but did not retain a single seat in Saskatchewan or Alberta.

“Albertans feel that everywhere we turn, we are being blocked in, pinned down and even attacked within our own country for what we do to contribute to it,” Kenney said in the legislature.

The Conservatives won 33 out of 34 seats in the province and the Liberals lost the three seats they held. Only the NDP was able to keep its one seat in Edmonton.

Kenney said he told Trudeau that he must support Alberta by helping it get its oil and gas to international markets.

He has also called on the prime minister to avoid any deals with the NDP, Bloc Quebecois or Greens that would endanger the TransMountain pipeline expansion through British Columbia.

In Saskatchewan, the Conservatives won 14 out of 14 seats. Liberal veteran Ralph Goodale, who had held his Regina Wascana seat for more than 25 years, was swept out.

“The path our federal government has been on the last four years has divided our nation,” Moe said in a statement.

“Last night’s election results showed the sense of frustration and alienation in Saskatchewan is now greater than it has been at any point in my lifetime.”

Speaking in Regina on Tuesday, Conservative Leader Andrew Scheer said he believes in Canada as a whole, but he hears the frustration coming from both provinces.

“We will fight for you. We will do everything we can to make sure that this Liberal government understands that it has to change course,” Scheer said. “It cannot continue to attack our energy sector.”

Moe said Trudeau must fulfil the demands of the two provinces if he is serious about reaching out to the West.

“Last night, Prime Minister Trudeau stated to Saskatchewan and Alberta: ‘I’ve heard your frustration. I want to be there to support you,”’ Moe wrote.

“Those are nice words, but we need action, not words.”

Moe said he is ready to meet with Trudeau at any time to discuss the issues he has raised.

“Prime minister, you said you heard our frustrations and want to support us. We are ready for you to prove it.”

Kenney said Trudeau must keep that promise “to avoid real, lasting damage to the unity and prosperity of this federation.”

He said he will be creating a panel to gather ideas on how Alberta can be treated more fairly.

Premier Brian Pallister of Manitoba, where the Liberals lost three seats, said his government is ready to work with them, as well as all other parties. He said he has no interest in spending any time on talk of western separation.

“I don’t think you ever get anywhere in building a stronger relationship by threatening to leave it, so I don’t have any time for that.

“You have got to work together.”

—With files from Kelly Geraldine Malone in Winnipeg.