B.C. premier John Horgan says it doesn't matter who owns the Trans Mountain pipeline expansion project, his government is still going to fight to stop it 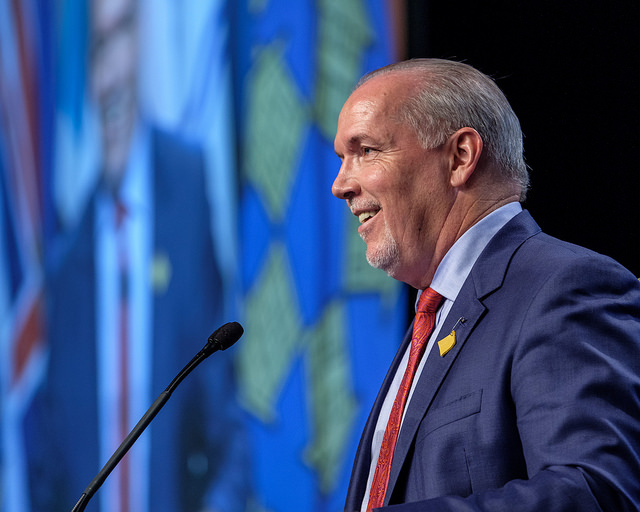 Horgan’s fight against Trans Mountain appears to be far from over. PHOTO: Province of B.C./Flickr

VICTORIA—Premier John Horgan says he will continue the fight to protect British Columbia’s coast from the consequences of an oil spill regardless of who owns the Trans Mountain pipeline.

The federal government’s decision to take over the pipeline from Kinder Morgan doesn’t change his government’s position to oppose the expansion project from Edmonton to Burnaby or its decision last month to pursue a reference case to the B.C. Court of Appeal, Horgan said Tuesday.

“I believe we have an obligation to ensure that we are doing everything we can to avoid the catastrophic consequences of a diluted bitumen spill,” he said.

Horgan said Ottawa’s decision to buy the pipeline does not reduce the risk to B.C.’s environment and economy, which is why the province is asking the court whether it has jurisdiction to protect itself from a spill. The fact the pipeline is about to be owned by a federal Crown corporation doesn’t affect the reference case, he added.

But the federal government’s decision to take over the project puts Ottawa in charge of managing the pipeline, including its risks, Horgan said.

“I do believe the federal government now is totally accountable, not just for regulation and approval of a pipeline, but they now are responsible from wellhead to tidewater and beyond,” he said. “That allows us now to have more candid discussions with the owners of the pipeline than I would have been able to when they were shareholders in a Texas-based oil company.”

B.C.’s Opposition Liberals said Horgan is about to be given the cold shoulder by Prime Minister Justin Trudeau’s government.

“This is a bad day for B.C. because John Horgan has decided to kick the feds in the shins,” Liberal Leader Andrew Wilkinson said. “This is a government that is creating investor chaos here in B.C.”

Political experts said relations between B.C. and the federal government and neighbouring Alberta are strained over the ongoing pipeline dispute, but Trudeau’s Liberals have the most to lose with the pipeline purchase.

The move could backfire politically in B.C., where the federal Liberals hold 14 seats, and globally on the environmental stage because the government has committed to fight climate change but has chosen to buy a pipeline, said Prof. Kathryn Harrison, an expert on federal-provincial relations at the University of British Columbia.

“By repeatedly saying the pipeline will be built, prime minister Trudeau has painted himself into a corner where this was the last and only option,” she said in an interview.

Prof. David Tindall, an expert on climate change politics at UBC, said Horgan has gained support in B.C. for his calm and focused approach to the pipeline debate.

“He’s really emphasized the issue of trying to avoid oil spills and protecting the coast,” he said. “That’s one set of environmental issues, I think, that has broad support.”

Horgan also gained support by not appearing as an environmental ideologue through his comments that endorse oil refineries over pipelines and his backing of liquefied natural gas projects, said Tindall.

The federal decision to buy the pipeline could prompt further legal challenges by Indigenous Peoples, said Prof. Margot Young, a constitutional law and Indigenous legal rights expert at the University of British Columbia’s Peter A. Allard School of Law.

“What is clear is that local and Indigenous opposition to the project can only be inflamed by this federal move,” she said. “And that opposition is independent of any constitutional decision reached by the courts.”