In a report released Apr. 3, the TSB found a low approach speed to the landing zone and the helicopter being close to its maximum weight may have led to a loss of control 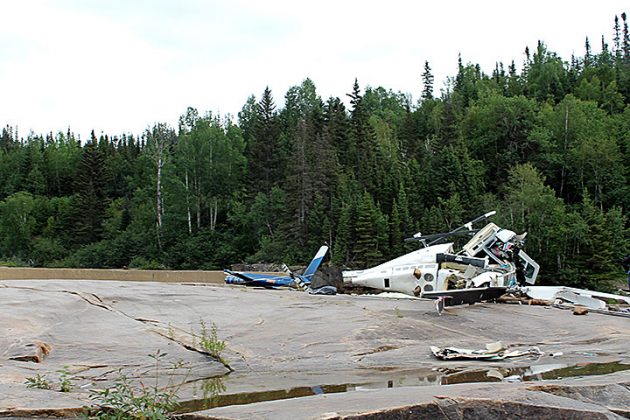 The Sep. 2 2015 crash of a Bell 206B helicopter in Sept-Îles, Quebec, killed two. PHOTO: Transportation Safety Board of Canada

DORVAL, Que.—In its investigation report released Apr. 3, the Transportation Safety Board of Canada (TSB) determined that the pilot’s inexperience and a challenging landing site were factors in a September 2015 fatal helicopter accident near Sept-Îles, Quebec.

Two passengers were killed in the accident when the Bell 206B’s tail rotor became ineffective and the helicopter lost directional control. The pilot and two other passengers suffered serious injuries during the crash.

The accident happened Sep. 2 2015, on a flight operated by Héli-Nord out of the Sept-Îles Airport in northeast Quebec. The purpose of the flight was to inspect a salmon pass on Nipissis River, approximately 20 nautical miles north of Sept-Îles.

There were four passengers and a single pilot on-board the helicopter.

During the final approach to the landing site, a few feet from the ground, the engine torque exceeded its limits, causing the nose of the helicopter to veer off course. The pilot tried to regain control, but was unsuccessful. The helicopter crashed heavily into a rock, and a fire started in the engine tailpipe.

The investigation determined that the pilot’s lack of experience on the helicopter prevented him from recognizing the loss of control and counteracting it in a timely manner. The pilot had trained on a similar helicopter in the past, but this particular model had differences in terms of tail rotor performance and available engine power, leaving him ill-prepared to deal with the critical situation.

TSB also found that the helicopter was operating at a weight close to the maximum allowable load of 3,200 pounds and in a flight regime that led to a loss of directional control at an altitude that did not allow any recovery.

“An increase in power beyond this limit (the engine torque’s limit), the low approach speed and the fact that the aircraft was close to its maximum allowable weight are elements that may have led to the loss of directional control,” the TSB report said.