Toronto, province at odds after Wynne flip-flops on highway tolls 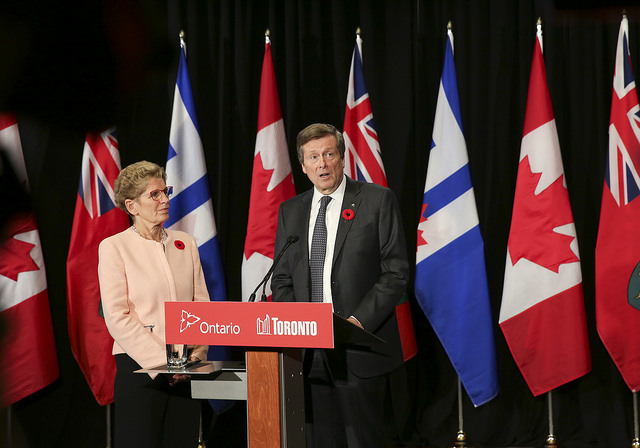 The Ontario premier and Toronto mayor have met frequently. But this week’s talks took on a frostier air than those last fall when the two fielded questions together. PHOTO: Premier of Ontario Photography/Flickr

TORONTO—Cracks appeared Jan. 30 in the relationship between Ontario and its largest city amid a dispute over toll roads, and while the premier insisted it wasn’t broken, the mayor said it had definitely changed.

Premier Kathleen Wynne and John Tory met Monday, just days after she denied his request for tolls, and the normally friendly air after their regular meetings turned a bit frostier.

“Last week, the nature of our city’s understanding with the province fundamentally changed,” Tory said. “Those events meant that it couldn’t just be business as usual.”

Wynne said while it’s clear Tory is not happy, their meeting was “perfectly collegial” and they continue to work together on a host of other issues.

“I don’t think this is about a broken relationship. I know it’s not.”

Wynne and Tory take media questions together in joint press conferences after their regular meetings, but Tory left the legislature immediately after their talk Monday and instead held his own news conference at city hall.

“I’m always happy to stand beside the mayor and talk to the people of Toronto and the people of Ontario,” Wynne said when asked about the reason for their separate availabilities.

The pair also usually let media into their meeting room at the end of their chats for pictures and video while they make small talk, but they did not on Monday, with Wynne seeing Tory off at her office door with a quick handshake.

Tory remarked on Friday that he felt the province treated him like “a little boy going up to Queen’s Park in short pants.”

Toronto city council voted in favour of tolls on two major highways, and though Wynne initially seemed to support it, she announced last week that it wouldn’t happen.

She says there need to be more transit options in place first, and instead is doubling municipalities’ share of gas tax funding for transit—of which Toronto will receive $170 million per year.

But Tory said Monday that he wasn’t under the impression it was an either/or option, and that tolls wouldn’t have been enacted until a transit plan was in place anyway.

“We had the courage as a council to step forward and say, ‘We believe this is the best of the available options at this time’ and we had nothing but encouragement to do that,” Tory said. “Then to find in the later part of December after the council vote that things were getting very wobbly indeed and resulting in what we saw last Friday, yes, it’s frustrating.”

Tory said he now hopes the province will match federal housing funding, which he is “confident” will be in Ottawa’s budget.