by The Canadian Press, with files from Canadian Manufacturing.com Staff  June 13, 2017 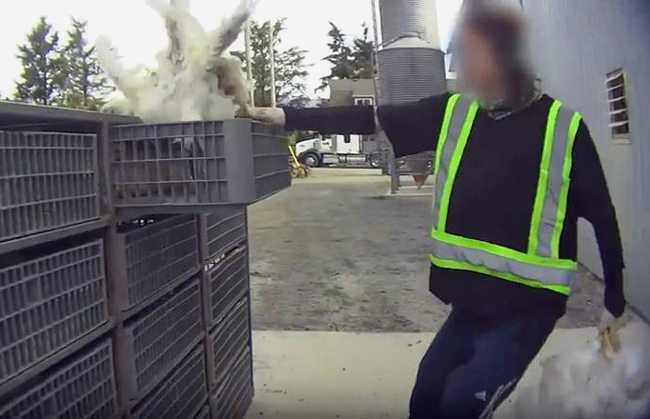 The animal advocacy groups says the footage was shot at more than a dozen large farms in B.C. that supply a Lilydale plant in Port Coquitlam. PHOTO: Mercy For Animals/YouTube

VANCOUVER—Animal advocates say they have opened an investigation into “absolutely sickening” alleged animal abuse by a chicken-catching service in Chilliwack, B.C.

B.C. SPCA spokeswoman Marcie Moriarty says the agency has launched a formal investigation after receiving undercover video that allegedly shows multiple workers throwing, hitting, dismembering and killing the birds, and forcing the animals into violent sexual acts with each other.

The footage was shot by non-profit animal advocacy group Mercy For Animals between May 10 and June 9. The interest group said the video includes footage from more than 12 large farms in B.C. that supply a Lilydale slaughterhouse in Port Coquitlam.

“Ethical and responsible treatment of animals is of utmost importance to our organization,” the company said in a statement.

“We are taking immediate steps with our supplier to initiate a comprehensive investigation of the situation and have engaged internal and external expertise to help us determine proper course of action in line with our animal care commitment and expectations.”

Investigators with the B.C. SPCA are working on a report that will be forwarded to Crown counsel and Moriarty says they will be recommending multiple charges of animal cruelty under both the Criminal Code and the Prevention of Cruelty to Animals Act.

She says if the individuals are convicted, they face a fine up to $75,000, a maximum five-year prison sentence and could be banned for life from owning or being around animals.

The people shown in the video need to be held accountable for their actions, Moriarty says.

“The video includes some of the most brutal and sadistic acts of violence against animals I have ever seen,” she says. “It is extremely difficult to watch.”

Meanwhile, Sofina said it has contacted its supplier’s owner and requested all of the employees involved in the abuse be immediately dismissed.

“We have also expressed our expectation that all of the supplier’s employees be requalified on the importance of animal care and fully understand the consequences of not following protocols,” the company said.

Chicken Farmers of Canada, which represents 2,800 chicken farms across the country, called the video “shocking and reprehensible,” adding there “is no defense for the mistreatment of birds.”

The organization said it will collaborate with government and industry authorities to ensure the situation is addressed. It added that the activities seen in the video are not representative of the industry as a whole.