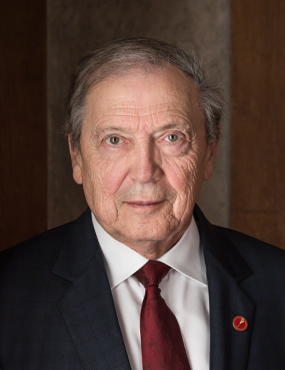 OTTAWA—Conservative Sen. David Tkachuk says he won’t apologize for comments he made at a pro-pipeline rally in Ottawa, calling criticism that he was inciting violence “manufactured outrage.”

Tkachuk spoke Tuesday to the United We Roll convoy, which left Red Deer, Alta. on Feb. 14 and expressed a wide variety of demands, some related to the oil and gas sector. The convoy participants opposed bills that will overhaul environmental assessments of energy projects and ban oil tankers from the northern coast of British Columbia.

Tkachuk told the crowd, many of whom had driven across the Prairies and Ontario in pickup trucks and semis, to “roll over every Liberal left in the country … Because when they’re gone, these bills are gone.”

The Saskatchewan senator said in a statement the comment was a figure of speech, in the context of an election year.

“This is manufactured outrage by the Liberals to distract from the real plight of our and gas industry and the harm they are doing to the West—to my province—with their policies,” it read. “The words I used may not have been as artful as I would have liked and certain individuals are happy to misinterpret them to suit their own self-interest, but I am not going to apologize for that.”

Privy Council clerk Michael Wernick prefaced an appearance at the House of Commons justice committee on Thursday by voicing grave reservations about the state of political dialogue.

Wernick did not mention Tkachuk directly but said it was “totally unacceptable” that a parliamentarian would incite people to drive trucks over others after 10 pedestrians were killed in a van attack in Toronto last year.

“I hope that you as parliamentarians are going to condemn that,” he said.

Vaughan said the remark was in reference to the “whack-a-mole” carnival game, where players hold a mallet and hit targets as they randomly pop up from a board.