75-year-old pipeline between Montreal and Maine shuts down 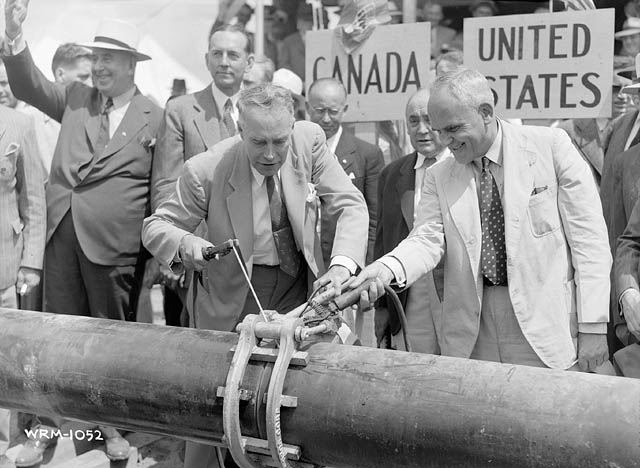 Inauguration of the the pipeline at the U.S. Canada border in 1941. William Willis, then Governor of Vermont and C.D. Howe, then Canadian Minister of Munitions and Supply pictured. PHOTO: Library and Archives Canada

PORTLAND, Maine—A pipeline buried under three New England states that carried foreign crude oil from the Port of Portland to refineries in Montreal for 75 years has been mothballed. The oil has stopped flowing.

The 236-mile-long pipeline was built to provide for the safe transport of crude oil to Quebec at a time when German U-boats that could sink oil tankers were patrolling the western Atlantic.

But the flow dropped to zero in January, according to state data, and a ship chandler in Portland says the pipeline had no tanker deliveries in February.

The amount of oil flowing through the pipeline has been dwindling for years, and the completion last fall of a major pipeline reversal project in Canada has left the pipeline of no use. The refineries in Quebec now get their oil from the vast oil sands reserves in Alberta.

“There is no need to move crude oil from Portland to Montreal. That is a permanent change,” said John Auers, executive vice-president of Turner, Mason & Co., a Dallas petroleum industry consulting firm.

If oil ever again moves through the pipeline, Auers said, it probably will be going the other way, bringing tar sands oil from western Canada and North Dakota to Portland Harbor for delivery to refineries on the East Coast and overseas.

While the pipeline could be repurposed to carry other petroleum products, such as natural gas, the most obvious use is to deliver crude oil to a seaport, said Sandy Fielden, director of energy analytics with RBN Energy, a Texas consulting firm.

The decision in December by Congress to lift the 40-year ban on exports of domestic oil has made reversing the flow of the pipeline more likely, he said.

The city of South Portland, where the pipeline ends, has banned the export of oil through the city because of environmental concerns. Environmentalists say tar sands oil has greater greenhouse gas emissions and is more corrosive so it could leak from the pipeline.

The Portland Pipeline Corp. has sued the city in federal court. The lawsuit is still pending.

“Nothing is going to flow until this court case is resolved,” said Mark Usinger, a Portland ship chandler who for years has delivered supplies to the oil tankers. “The demand is gone.”