Construction on the long-delayed US$5.3 billion copper and gold project is expected to begin later this year 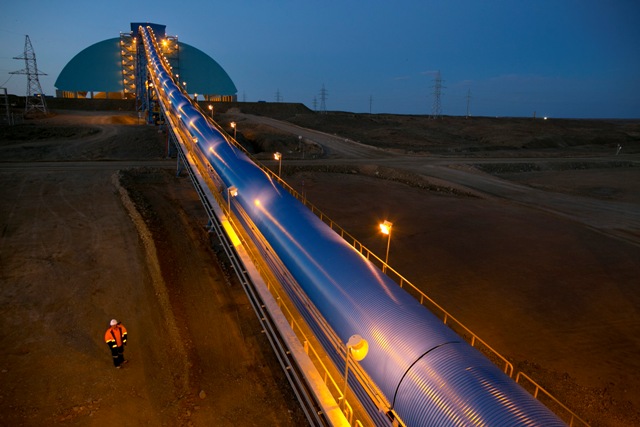 The Oyu Tolgoi mine in Mongolia has been delayed for years due to political tension. PHOTO: Rio Tinto

BEIJING—Anglo-Australian mining giant Rio Tinto and a Canadian affiliate announced May 6 that they’ve given a green light to the launch of the next stage of a multibillion-dollar gold and copper mine in Mongolia, following delays and political tension over revenue sharing and the foreign role in resource industries.

The underground portion of the Oyu Tolgoi mine will go ahead after Rio Tinto, Vancouver-based Turquoise Hill Resources and the Mongolian government agreed on a US$5.3 billion investment plan.

He added that underground production is expected to begin about the time of a projected global deficit in supplies of copper—an important metal used for a variety of consumer, construction and industrial purposes.

Oyu Tolgoi became a symbol of tense relations between Mongolia and foreign investors. Expansion plans were delayed by disagreements over how to share revenue in the impoverished but resource-rich country between China and Russia.

Early stages of the massive project were begun by Turquoise Hill, then called Ivanhoe Mines, which later partnered with Rio Tinto—one of the world’s biggest mining companies. The Mongolian government currently owns 34 per cent of the complex and Turquoise Hill owns 66 per cent. Rio Tinto owns about 50.8 per cent of the Canadian company.

The latest agreement “is a clear demonstration that the country is back to business,” said the Mongolian prime minister, Chimediin Saikhanbileg, in a statement issued by Rio Tinto. He said the project will be “a catalyst for further investments that will strengthen Mongolia’s economy.”

Minerals make up 94 per cent of Mongolia’s exports. With demand from China weakening as its economy cools, Mongolia’s own growth is forecast to fall below one per cent this year.

In March, some 2,000 protesters who criticized foreign mining concessions gathered in the central square in the capital, UlaanBaatar, to demand parliament be dissolved and a new government formed.

The investment “will transform Oyu Tolgoi into one of the most significant copper mines globally,” said Rio Tinto’s deputy chief executive, Jean-Sebastien Jacques, in a statement. “This is a long-term partnership, built to create mutual benefit.”