by Canadian Manufacturing.com Staff, with a file from The Associated Press  June 15, 2016 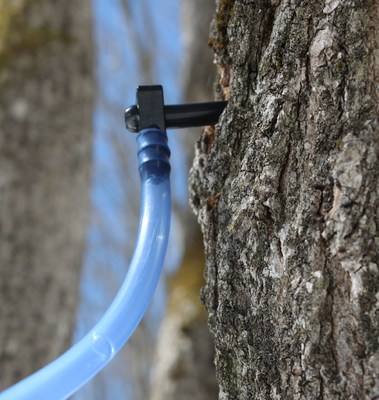 Quebec maple syrup producers plans to add five million taps this year as it works to boost production of one of Quebec’s staple exports. PHOTO: FPAQ

The syrup association, which through approximately 7,300 producers supplies the majority of the world’s maple syrup, has received the regulatory green-light from Régie des marchés agricoles et alimentaires du Québec (RMAAQ) to add five million taps to its expansive network next spring. FPAQ said the government clearance will boost the province’s production capacity, fuel an investment of up to $100 million in Quebec’s sugar bushes and allow hundreds of upstart syrup makers to enter production.

“Once these new taps are in production, they will help to reinforce Quebec’s position as a maple syrup leader by increasing its worldwide market share,” FPAQ President, Serge Beaulieu, said. “Ultimately, hundreds of businesses will expand and new businesses may even be created, helping to create wealth and prosperity in rural areas and contributing to a $70 million an increase in GDP, year after year.”

This spring, producers across the province used nearly 43 million taps to harness sap from millions of Quebec sugar maples. The harvest set a new record yield of 51.1 million litres (13.5 million gallons). With five million more taps, FPAQ hopes to shore up its dominant position in the syrup market while allocating part of the new production capacity to young syrup entrepreneurs and startups.

The Quebec syrup association, which has come under pressure recently to ditch its quota system, will dedicate 40,000 of the new taps to young entrepreneur producers aged 18 to 39. Startup businesses will also be guaranteed 1.3 million taps. Meanwhile, FPAQ will allocate the lion’s share of the new taps—3.6 million of them—to existing producers looking to expand their businesses.

South of the Quebec border, U.S. states, such as Vermont are consistently building their own market for the sweet North American delicacy. The U.S. Department of Agriculture reported the U.S. produced 15.9 million litres (4.2 million gallons) of maple syrup this year—the greatest amount since record-keeping began in 1916.