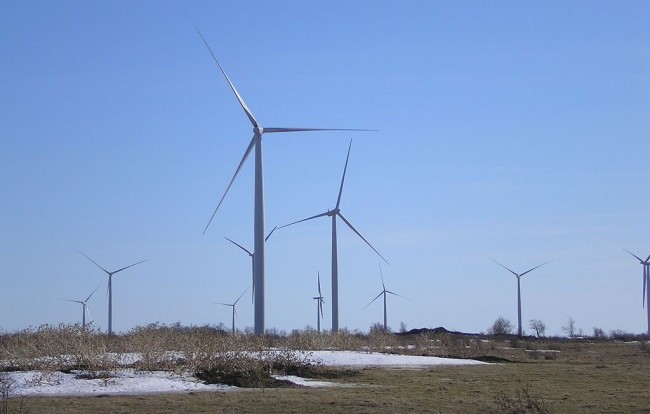 Company’s lawyer alleges the documents were destroyed around the time of the Liberals’ cancellation of two gas plants. Turbines on Wolfe Island pictured. PHOTO: Santryl, via Wikimedia Commons

TORONTO—Ontario’s Liberal government is facing another criminal investigation after a wind power company complained to police about the alleged destruction of documents in a lawsuit it filed against the province.

Trillium Power Wind Corp. has alleged in a lawsuit that government officials destroyed documents after the company sued in a case that stemmed from the government’s cancellation of a Lake Ontario wind project.

OPP Det.-Supt. Dave Truax said police began an investigation in the last couple of weeks after Trillium made a complaint.

Truax would not say that the allegations are about destruction of documents, but that the probe is looking into elected officials and/or civil servants, and that there is a “co-mingling” of issues with Trillium’s civil suit.

Trillium lawyer Morris Cooper alleges the documents were destroyed around the same time as emails are alleged to have been deleted in relation to the Liberals’ cancellation of two gas plants.

Premier Kathleen Wynne said the government was not aware of any Trillium-related investigation until Wednesday, but that it will co-operate fully.

“We’re committed to being open, accountable, and transparent,” Dan Moulton wrote. “Under Premier Wynne, we have new rules in place, including mandatory record-keeping rules and staff training and a new Accountability Act, which prohibits the wilful deletion of records, and creates a penalty.”

Trillium’s lawsuit arose in 2011 after the province cancelled the company’s wind project in Lake Ontario, about 28 kilometres from Kingston, Ont. At the same time, the government issued a moratorium on offshore wind farms, saying more scientific studies were needed.

The company alleges the government cannot back its claim that the decision to cancel the project was a “core policy” decision.

In the legislature Wednesday, Progressive Conservative Leader Patrick Brown accused the Liberals of issuing the moratorium and cancelling the project for political reasons.

“Why did the Liberal cabinet cancel the offshore wind projects?” he asked. “Is it because the current economic devleopment and trade minister was worried about the offshore wind develpment near the Scarborough bluffs (in his riding)? Was it to save the Liberal seat in Kingston? Or was it because Trillium never donated to the Ontario Liberal Party?”

NDP Leader Andrea Horwath noted this is not the first, or even the second, criminal investigation this government has faced.

In addition to the Trillium and gas plants investigations, the OPP is looking into financial irregularities at the Ornge air ambulance service, and potential breaches of a bribery section of the Election Act related to a 2015 byelection in Sudbury, Ont. A Liberal fundraiser was charged in a criminal investigation over the same byelection allegations, but those charges were recently stayed.

In its statement of claim, Trillium alleges that government workers assigned a code name in discussions of the wind project to hide communications.

Trillium alleges that through the litigation process it discovered emails to and from then-premier McGuinty’s office that were not listed in records the government produced. The company alleges that destruction of evidence happened about a year after the lawsuit was launched.

“There are thousands of land-based wind turbines around the world backed by decades of science and experience,” he said. “Offshore wind in fresh-water lakes is still in early stages of development worldwide, and that’s why we still have a moratorium on offshore wind development.”