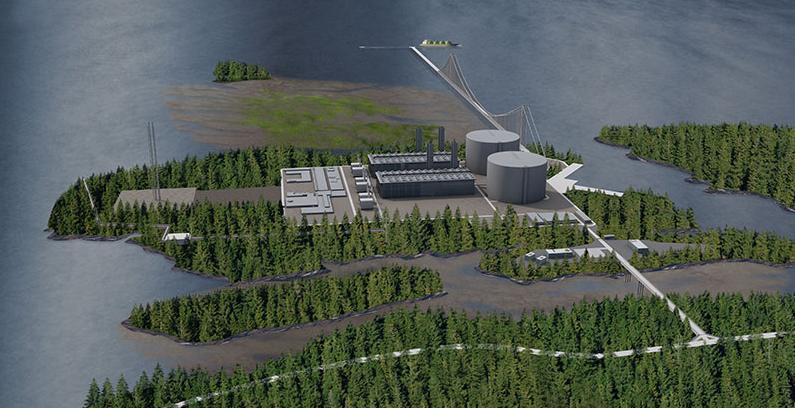 Environment Minister Catherine McKenna, Natural Resources Minister Jim Carr and Fisheries Minister Dominic LeBlanc travelled to Richmond, B.C., to announce their government’s acceptance of what is expected to be one of the largest infrastructure investments in Canadian history.

There are 190 legally binding conditions attached to the approval, including for the first time the imposition of a condition placing a maximum cap on greenhouse gas emissions, McKenna said.

“This project was subject to a rigorous environmental assessment and today’s announcement reflects this commitment,” she told a news conference, which was interrupted by three hecklers from the Lax Kw’alaams First Nations band as the ministers spoke outdoors on the waterfront near Vancouver’s airport.

The Petronas-led $36-billion liquefied natural gas project on Lelu Island near Prince Rupert, B.C., would ship 19 million tonnes a year of liquefied gas to markets in Asia while pumping more than five million tonnes of carbon dioxide annually into the atmosphere. That would make it one the largest single greenhouse gas emitters in Canada, according to the Canadian Environmental Assessment Agency.

The government’s conditional approval sets the table for an autumn of more crucial decisions on a national climate change plan and energy sector infrastructure.

But it doesn’t necessarily mean the massive LNG project will ever get underway.

Low global oil prices and an increasing supply of natural gas have depressed international prices for LNG, making the economics of the project less certain than they were when it was first announced in 2013.

Pacific NorthWest LNG said in a statement Sept. 27 that it was pleased with the government’s announcement.

Despite the market uncertainty, the decision by the cabinet of Prime Minister Justin Trudeau signals the course the new Liberal government will navigate among competing interests on the energy and environment files.

“The only way to get resources to market in the 21st century is if they can be done in a responsible and sustainable manner,” McKenna said in a news release. “This decision reflects this objective.”

The government says the conditions it is placing on the project are aimed at minimizing effects on fish, fish habitat, marine mammals, wetlands, migratory birds and human health.

But environmental groups saw a contradiction in the government’s approach.

“Approving this project is inconsistent with the federal government’s commitments to lead on climate change and clean innovation,” said Merran Smith, executive director of Clean Energy Canada. “The conditions that come with this approval set the bar too low.”

“How can prime minister Trudeau claim to be a climate leader on the international stage, while approving this new project that will become the single largest source of climate pollution in the country,” she said in a news release.

Carr said the facility will add nearly $2.4 billion per year in Canada’s GDP.

“This project further plants the Canadian flag on the world stage of natural gas exporters. Positions us to supply dynamic emerging economies while contributing to the fight against climate change.”

He said for the first time ever, there will be environmental monitoring committees watching over the project, in partnership with indigenous communities to share information on compliance and enforcement.

He said both First Nations affected by the project have been invited to be part of the committee.

Ottawa says an estimated 4,500 jobs would be created during the construction phase of the project, and 630 workers would be needed to operate the facility.

Environmentalists and First Nations have denounced the Pacific NorthWest LNG project due to concerns over salmon habitat as well, while pro-development advocates, including the B.C. government of Christy Clark, have called it a key economic driver for the country as a whole.

At Tuesday’s announcement, Clark said B.C. has as much natural gas as Alberta has oil in its oil fields.

Even before the government said it was pulling the trigger Tuesday, a group of six First Nations from the Skeena corridor issued a release saying the project “does not meet the test” for respecting indigenous rights and would be challenged in court.

“Providing a green light for this project at this time will only lead to protracted litigation which benefits no one,” said the Skeena Corridor First Nations, whose traditional lands include Lelu Island where the project will be centred.

Conservative interim Leader Rona Ambrose said in Ottawa that Trudeau had only one decision he could make on the project, and the prime minister now needs to “champion the project” to help make it a reality.

“He needs to make this project important, not only for British Columbians, but for all Canadians,” said Ambrose, citing the job creation and investment potential.

McKenna will carry the Pacific Northwest decision into a meeting with her provincial and territorial counterparts next Monday in Montreal, where they are set to begin negotiations on a strategy for meeting Canada’s international climate commitments.

Canada has pledged to reduce its emissions 30 per cent from 2005 levels by 2030, but the country’s greenhouse gas output has been on a slow but steady rise for the last five years.

A draft assessment of Pacific NorthWest project released in February found that it would emit 5.3 million tonnes of carbon dioxide a year for 30 years, not including another 6.5 million to 8.7 million tonnes produced from natural gas collection and transportation.

“This will increase the B.C. and national emission totals by 8.5 per cent and 0.75 per cent respectively, based on 2011 levels,” said an early project assessment.

It won’t be the first difficult call for the Liberals this fall.

The government must decide by mid-December whether to approve the proposed expansion of the Trans Mountain oil pipeline from Alberta to Burnaby, B.C., while also negotiating a climate policy with the provinces and territories that McKenna has said will include a national floor price on carbon.