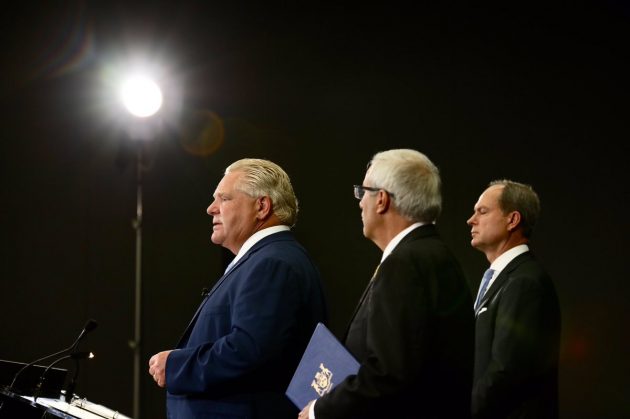 Scrapping the cap-and-trade system was one of Ford’s key promises during the spring election campaign. PHOTO: Doug Ford/Twitter

TORONTO—Ontario’s fiscal watchdog said Tuesday it will examine the new Progressive Conservative government’s cancellation of the cap-and-trade program in order to determine how much that decision will end up costing the province.

Financial Accountability Officer Peter Weltman said the work on the review, which was requested by Opposition Leader Andrea Horwath, was already underway.

“There are some key considerations with cap-and-trade,” Weltman said. “We need to get more detail from the government as to how they intend to manage those considerations.”

Weltman said the review will not focus on the environmental impacts of cancelling cap-and-trade, but will look solely at the fiscal implications of the decision, such as the cancellation costs related to the $3 billion in permits businesses have purchased since the Liberals introduced the system in 2017.

“There will be no more auctions so there’ll be no more revenue,” Weltman said. “On the spending side, how many of those spending programs have stopped or will stop or might stop? We need to get more detail on that before we can put together a fulsome analysis.”

A spokesman for Premier Doug Ford said at this time the government is not aware of the FAO’s request for documents but will comply.

“Our government will work with the Financial Accountability Office to ensure they have access to the documents they need,” Simon Jefferies said in a statement.

Scrapping the system was one of Ford’s key promises during the spring election campaign. Once elected, his Tory government promised to provide clear rules for an “orderly wind down” of the system.

With cap-and-trade on the way out, it’s not immediately clear if the government will compensate permit holders. Ford has also come under fire for failing to explain how he would make up for the lost revenue.

Last week, Ford announced Ontario would join Saskatchewan’s court challenge of the federal government’s ability to impose a carbon price upon the provinces. During the election, the Tories estimated the legal fight would cost taxpayers $30 million over four years.

Horwath said Tuesday she’s pleased the Financial Accountability Officer is going to examine the government’s decision to cancel cap-and-trade and report back to the legislature.

“It’s going to be important for the people of Ontario to get the details,” the NDP leader said. “Mr. Ford talked about wasting the people’s money but here he is doing the exact same thing and it could cost billions and billions of dollars. We’ve seen this movie before.”

The government’s cap-and-trade decision is one of a number of deeper dives the Financial Accountability Office, an independent office of the legislature, said it will tackle in the coming year, including programs on education and social services.

“(We) try to help MPPs (members of the provincial legislature) get their heads around how these programs work and then they can start asking question,” said Weltman, who has been on the job for two months, but spent nearly a decade in Ottawa working in the Parliamentary Budget Office.