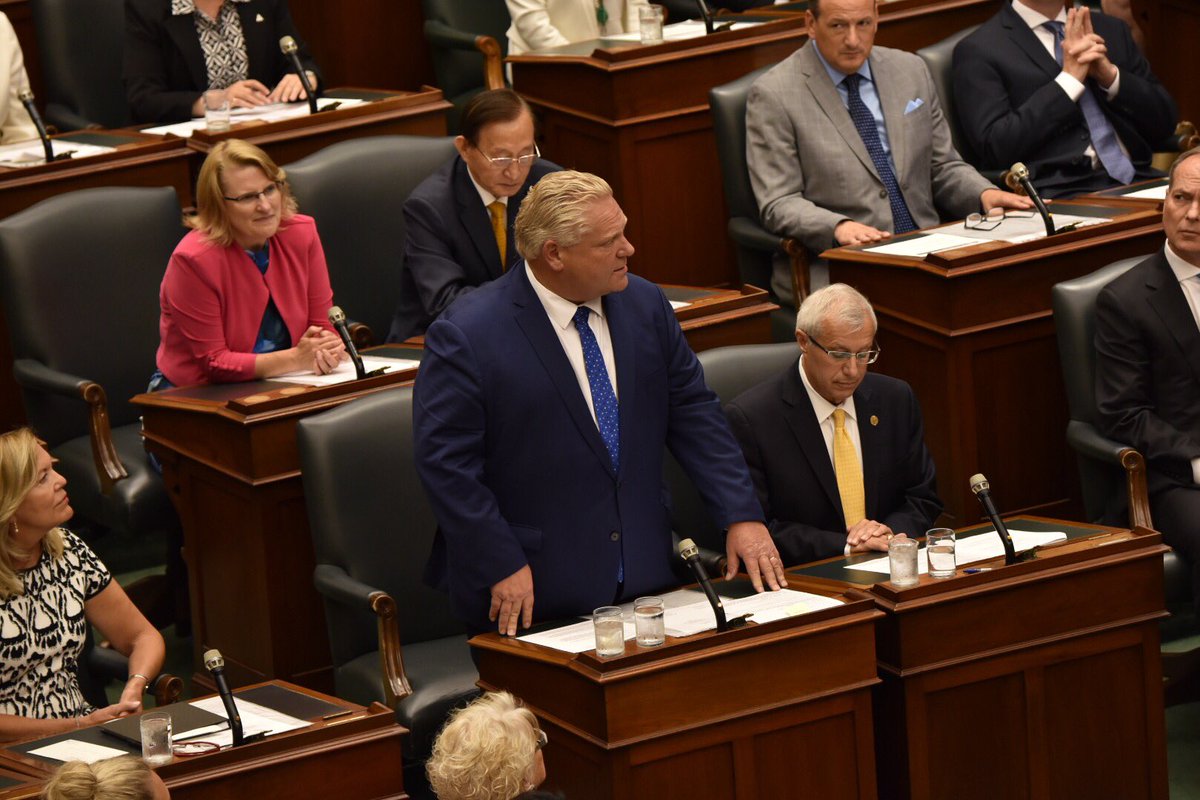 TORONTO—Ontario’s new Progressive Conservative government vowed Thursday to bring in sweeping changes meant to restore public trust in the province in a throne speech that played up promises made by Premier Doug Ford during the spring election campaign.

The speech—written by the premier’s office and read by Lt. Gov. Elizabeth Dowdeswell at the Ontario legislature—set out a road map for the majority Tory government’s term, pledging to cut taxes, provide long-term funding for the health-care system and slash government waste.

It did not introduce major new promises but instead highlighted key pledges from Ford to conduct a line-by-line audit of all government spending, pull out of the cap-and-trade system and fight “oppressive” taxes, including the imposition of a federal carbon price.

The government also laid out its plan to expand the sale of beer and wine to convenience stores, grocery stores and big-box stores, and to roll back restrictions on police officers, calling the measures a show of respect for consumers and law enforcement, respectively.

The government has been given “a clear mandate from Ontarians” to carry out its vision at a pivotal time for the province, the speech said.

“The fact is that Ontario is at a critical juncture. We face mounting challenges at home and abroad. These challenges, if left unchecked, threaten livelihoods and imperil public services,” it said.

“We cannot afford to dither or delay. To overcome these challenges we must challenge the status quo, reject the old compromises and embrace change.”

The government stressed the need for collaboration—with other levels of government, with parents and teachers, with law enforcement—in vowing to restore faith in public institutions.

“In a time of global turmoil and change, maintaining and strengthening the bond between the people and their public representatives must always be top of mind for us all. It is very much top of mind for your new government,” it said.

The speech promised the government will reduce taxes for parents, small businesses and the working poor, and pledged to bring down electricity bills. During the election, Ford promised to cut the middle class tax rate from 9.15 per cent to 7.32 per cent, but the plan would not be implemented until 2020-2021.

The throne speech further said the government will provide stable health-care funding, including a $3.8 billion investment in mental health, addictions and supportive housing. The speech was vague about how it would pay for the enhancements to health care, but the government has promised to find efficiencies through a Commission of Inquiry and the audit of government books.

The speech made no mention, however, of one issue the government had said would be one of its priorities for the rare summer sitting of the legislature: ending an ongoing strike at York University.

Ford nonetheless stressed that priority and others in a statement Thursday, saying his government would get to work quickly so “people can see real change fast.”

“We are ending the deadlocked strike at York University so students can get back to school. We are striking the cap-and-trade carbon tax from the books. And we are cancelling unnecessary renewable energy projects to help lower your electricity bills,” he said.

Ford has already made good on two key promises this week.

His government announced it was immediately revoking the updated sex-ed curriculum brought in by the Liberals and reverting to the previous version of the document, which was enacted in 1998. Officials said they would consult with parents before modernizing the material.

The premier also announced the immediate retirement of the CEO of Hydro One and the resignation of the utility’s entire board of directors. He said the move would bring down electricity rates but struggled to explain how when asked repeatedly by reporters.

The Tories have also taken several other steps since their victory last month, including putting a number of laws passed by the previous government on hold. Their decision to cancel cap and trade has also put an end to a number of initiatives funded from the program’s revenue, such as rebates for green retrofits and a $100 million fund for school repairs.

The government has also put the public service under a hiring freeze and ordered ministries to cut all discretionary spending, as well as ordered a review of compensation for public service executives and managers.

“I think it’s pretty clear that this government is bent and determined to drag this province down,” she said. “To take us backwards, to take us into a race to the bottom and pull us into the last century, that’s what this throne speech says to me.”

Horwath said the speech also signals that the Tory government will begin to move away from providing essential public services in favour of cutting taxes.

Interim Liberal leader John Fraser was critical of the Tory’s plan to eliminate the cap-and-trade system.

“It’s distressing not to hear a plan for the environment and climate change,” he said. “You can’t just come in with a wrecking ball and take something down and then not build.”

Fraser also slammed the Tory pledge to repeal the sex ed curriculum and said claims that parents weren’t consulted during its development are wrong.

“The curriculum they’re repealing was the most consulted curriculum in Ontario’s history,” he said.

McMaster University political science professor Peter Graefe said unlike some previous Progressive Conservative throne speeches under the Mike Harris government, this speech had little in the way of detail on major items.

“It was very specific on the small things and vague on the big things,” he said. “On the big question of how they were going to pay for everything without cutting jobs or services and balancing the budget, there’s nothing.”