The province's books were balanced for the first time in a decade last year. A flurry of pre-election promises will push the government back into deficit. PC leader Doug Ford, meanwhile has promised to "restore fiscal responsibility" 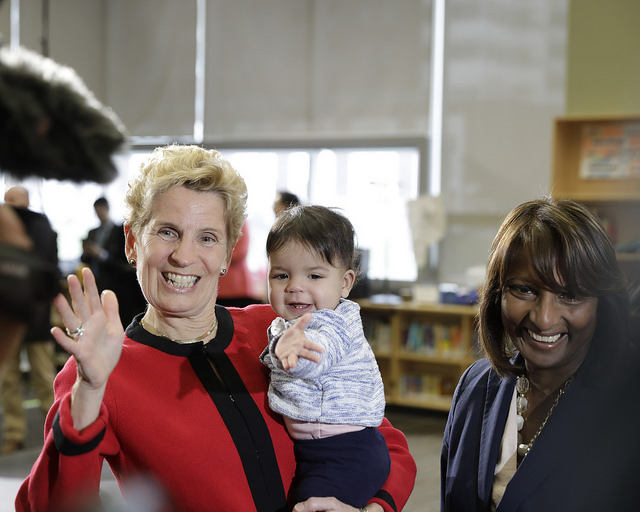 A program promising free child care for preschoolers was among the last-minute additions to the budget. PHOTO: Premier of Ontario Photography/Flickr

TORONTO—Ontario’s debt is ballooning as the Liberal government takes the province back into deficit in its final budget before a spring election.

After bringing the books to balance last year for the first time in a decade, the province’s fiscal plan delivered March 28 projects a deficit of $6.7 billion in 2018-2019, followed by deficits of $6.6 billion and $6.5 billion in each of the subsequent years.

The Liberals’ decision to run a deficit reverses a key promise to stay in the black this year. The government had also previously projected the balance would extend to 2020. The province now anticipates its annual deficit will decrease gradually until 2024-2025.

The overall size of the budget, which pumps billions into health care, child care and other programs, has grown to $158.5 billion this year, up nearly 12 per cent from $141.1 billion last year.

He also said the government has built in a “tremendous amount of prudence and reserves” in its fiscal plan for any potential shocks to the system.

“I’m confident that as we move forward to invest in our economy, it will create greater growth, enabling us to have a stronger GDP and we’ll come to balance,” Sousa said.

“Relief is on its way,” Ford said. “We will restore fiscal responsibility in Ontario.”

Ford stopped short, however, of saying a Tory government would balance the budget in its first year if it was to win power. He said his party needs to take a closer look at the provincial books, given that Ontario’s auditor general has previously criticized accounting practices used by the Liberal government.

Economists say there is little rationale for the provincial government to go back into deficit given the strength of the Ontario economy.

Conference Board of Canada economist Craig Alexander said while there is some logic for programs in the budget such as free child care for preschoolers that will increase labour participation in the long run, the growing cost of servicing a larger debt cuts into spending on other priorities.

“When the unemployment rate is close to … full employment, there’s not much slack in the labour market, and the economy is delivering solid growth, there really isn’t a rationale for running deficits. At least not an economic rationale,” Alexander said.

Going into deficit now and in the coming years restrains the government’s ability to take a hit when the economic cycle takes a turn, said Douglas Porter, chief economist with BMO Financial Group.

“Eventually we will hit heavier weather. And ideally you would like to see government finances in relatively strong shape when we hit that heavy weather,” he said.

Going forward, the provincial government forecasts that the net-debt-to-GDP ratio will stay below the 2014-15 peak, but not resume a downward trend until 2022-23.