Will the province’s next premier be the veteran politico Andrea Horwath or the populist firebrand Doug Ford? Either way, Canada's largest province is in store for a big change 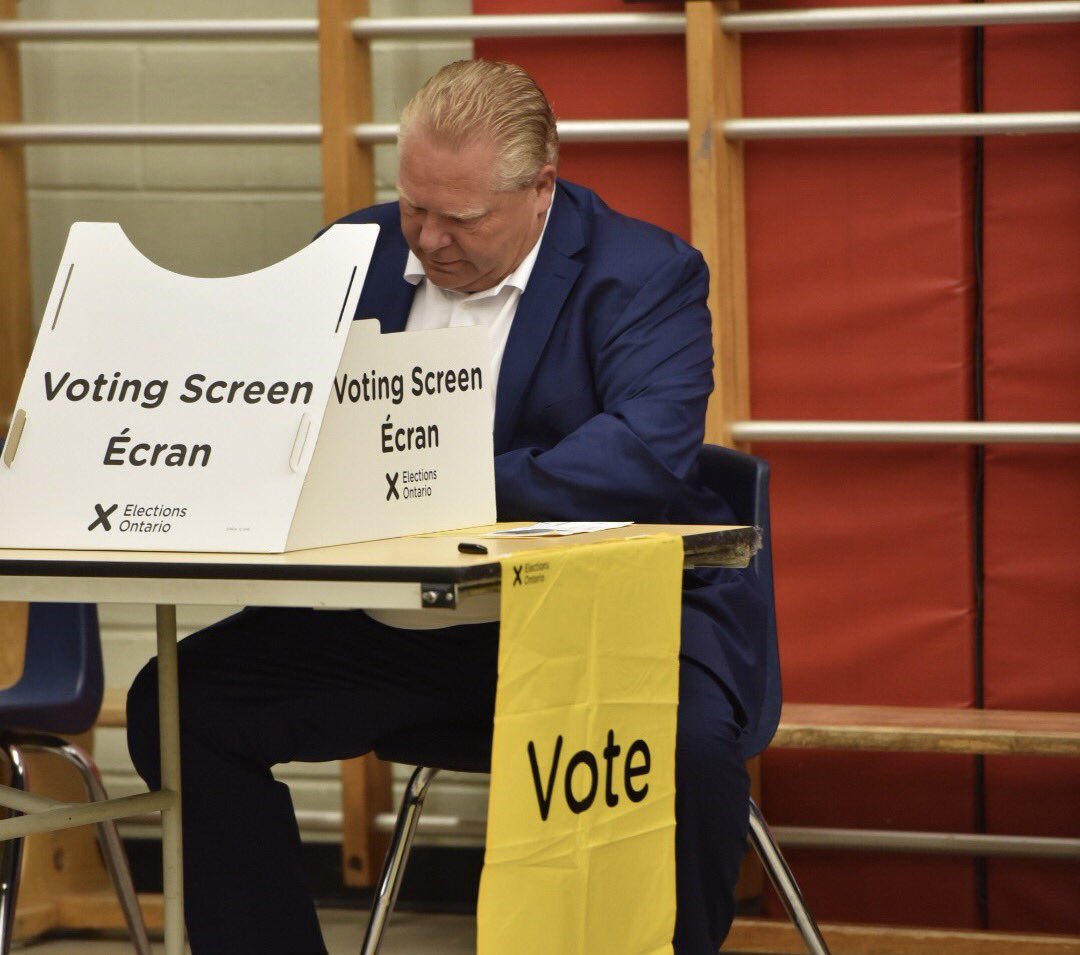 TORONTO—A handful of technical glitches surfaced during the early hours of an election day that promises to bring sweeping change to Ontario’s political landscape.

Ontario residents began heading to the polls on Thursday morning to cast their ballots in a race that’s pitting Doug Ford and the Progressive Conservatives against the New Democrats led by Andrea Horwath. The election is also raising questions about whether the governing Liberals, who have held power in the province for the past 15 years, will retain official party status.

Early in the day a number of voters took to social media to complain of problems with the new technology that’s been deployed across half of the province’s 7,200 voting locations in a bid to cut down staffing levels and speed up results.

But Elections Ontario said 99.6 per cent of the polls currently using the new scanning and tabulation machines are working as expected.

“The few voting locations that are experiencing technical issues are being addressed if they have not already been rectified,” the organization said in a statement. “In the event of a technical issue, poll officials will revert to the traditional paper method of servicing electors, the same process which is in place at polls where technology is not being used for voting.”

Two of the three party leaders were among those casting their ballots early on election day.

Premier Kathleen Wynne, who issued a stunning statement conceding her party’s looming defeat days before the election, appeared upbeat Thursday after voting in the riding she’s fighting to retain.

“I’m looking forward to what the people of Ontario decide,” she said. “It’s going to be an exciting night.” 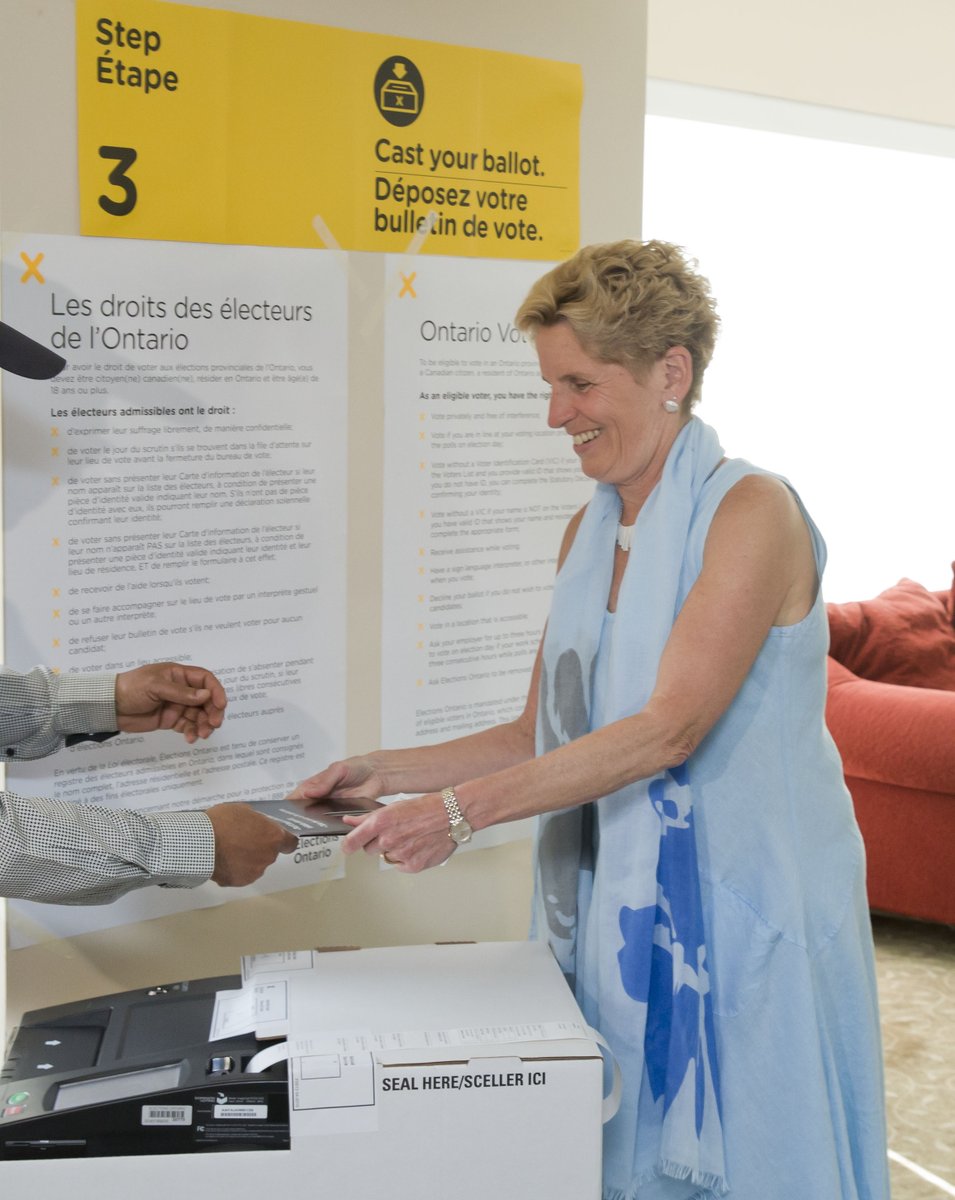 A smiling Ford simply said he was “feeling great” after casting his ballot in his home riding.

The Progressive Conservatives and the NDP have polled neck and neck for most of the campaign, with the Tories giving up a strong lead they held at the beginning. But a tie in popular support could lead to the Tories winning a majority of seats, projections suggest.

As Tory leader, Ford rolled out several popular promises, from cutting gas prices by 10 cents a litre to introducing buck-a-beer to cutting hydro bills. But he was accused of failing to be transparent by dodging calls to release a fully costed platform.

With about one week left in the campaign, the party published a list of promises and their price tags, but didn’t indicate how they would pay for them, what size of deficits they would run or for exactly how long.

Then in the waning days of the campaign, Ford family drama—that had laid mostly dormant in the public sphere since the death of his brother, former Toronto mayor Rob Ford—burst onto the scene with a lawsuit from Rob Ford’s widow alleging Ford mishandled his brother’s estate and destroyed the value of the family business.

By contrast, Horwath consistently polled as the most popular of the three party leaders, so Ford repeatedly slammed her roster of candidates as radical and inexperienced.

The Liberals warned that the NDP’s plan was not practical, gleefully pointing out mathematical errors in their platform, including one that increased their proposed deficit by $1.4 billion annually. Wynne also frequently slammed Horwath’s opposition to back-to-work legislation, saying it would lead to indefinite strikes.

Horwath made a pitch to undecided voters Wednesday, framing the ballot as a “stark” choice between her positive plan to help families create better lives and the cost-cutting proposals of Ford. 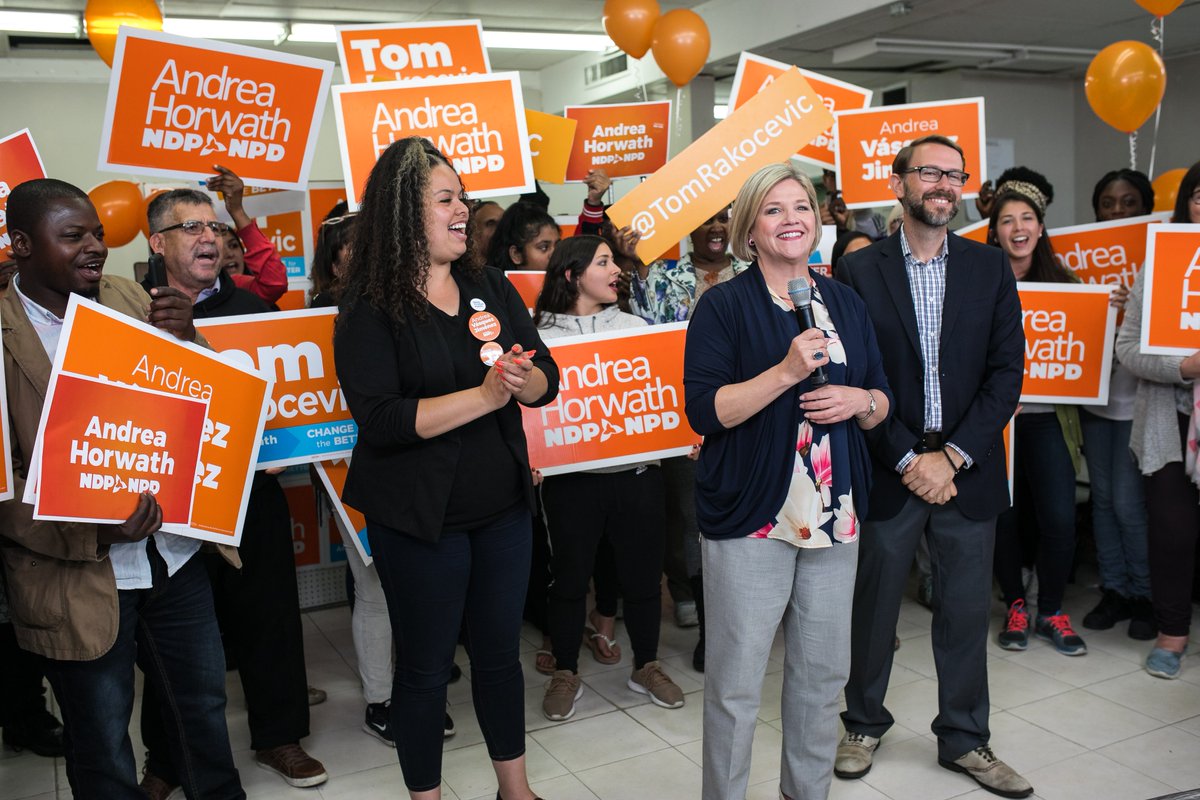 Horwath says it’s a “stark” choice between her and Ford. PHOTO: Andrea Horwath/Twitter

On Thursday while visiting campaign volunteers in Toronto, Horwath said it’s been a great campaign.

“I’m excited about the possibilities that await us tonight and tomorrow should we be given the opportunity to be the government that continues to push Ontario forward,” she said.

The NDP has been relegated for the past several decades to holding pockets of seats in the north, southwestern Ontario and Toronto. But party insiders say their number crunching shows them poised to capture seats in broader swaths of the province, eyeing several Liberal strongholds.

The Liberals came to power in 2003 under Dalton McGuinty, and when he stepped down in 2013, Wynne took the reins. She led the party to a majority in 2014, despite the party already being bogged down by scandals at eHealth Ontario, air ambulance service Ornge and a price tag of up to $1.1 billion to cancel two gas plants.

Her popularity began to dip after taking power, and reached well below 20 per cent in 2016 and 2017, in large part due to anger over rising hydro prices.

The Liberals eventually cut bills by eight per cent, then another 17 per cent months later, but by her own admission, Wynne failed to recognize early enough the impacts that investments in the energy system were having on people’s wallets.

She also faced criticism over her partial privatization of Hydro One and her decision to plunge the province’s books back into the red after finally getting them to balance in 2017-18.

Wynne insisted that the billions pumped into health care, child care and a drug and dental-care program represented necessary spending.

Wynne spent the last few days of the campaign pleading with voters to elect at least some Liberals. Party insiders say they are worried they could win fewer than eight of the province’s 124 seats, which would mean a loss of official party status in the legislature.

The day before polls opened, Elections Ontario advised voters in the riding of Ottawa-Vanier that inaccurate information about some voting locations appeared to be circulating.

On Thursday, the organization said it was not aware of similar situations arising in other ridings. A spokeswoman advised all voters to check their voter information cards or the Elections Ontario website for accurate information about where to vote.