Trudeau is facing criticism over his handling of the Trans Mountain pipeline expansion delay. The PM was in Fort McMurray, Alta., Friday, touring an oilsands mine and chatting with facility management and workers 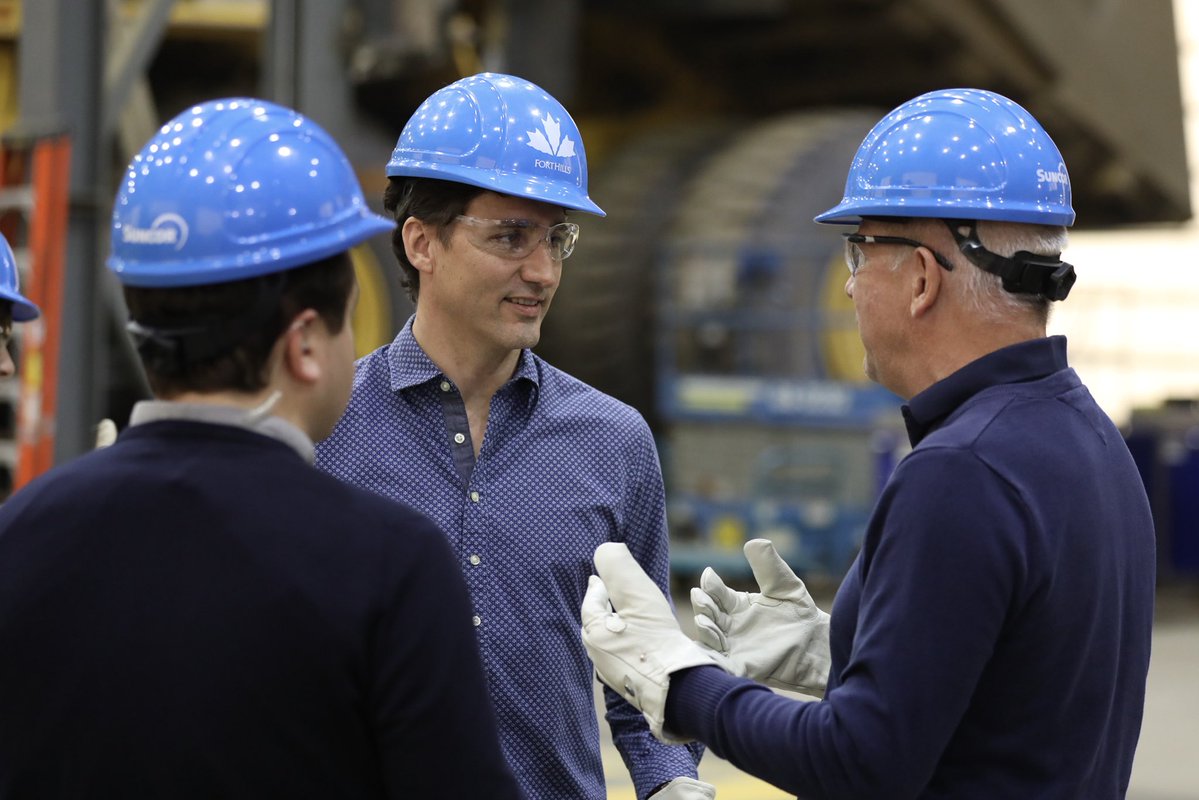 Trudeau visited Suncor Energy’s Fort Hills oilsands mine on April 6. He spoke with workers and met with Suncor CEO Steve Williams, who said he was “greatly encouraged” by their discussion. PHOTO: Justin Trudeau/Twitter

CALGARY—Athabasca Oil Corp.’s chief executive blasted the Liberal government for not providing regulatory certainty or doing its job to get pipelines built just as Prime Minister Justin Trudeau was visiting the heart of oilsands country on Friday.

“I would tell him he has to show leadership on the pipeline file. And it’s not just words,” said Athabasca CEO Rob Broen at the company’s annual general meeting in Calgary.

“He needs to back up Kinder Morgan, the pipeline he’s approved, and he needs to see it through to construction and make sure we can put shovels in the ground and get it built for the benefit of all Canadians.”

Trudeau, visiting the new Fort Hills oilsands mine near Fort McMurray, reiterated his support for the Trans Mountain pipeline expansion to the West Coast and repeated the message he delivered during stops in British Columbia earlier this week: that Canada needs to protect both the environment and the economy.

“We have to make sure that the balance is right, that we’re still globally competitive—and competitiveness is something this government will always focus on—but we also shouldn’t be part of a race to the bottom of trying to cut standards and pollute more just for the short term,” Trudeau said.

Athabasca has regulatory approval to double production to 40,000 barrels per day at its Leismer project and its Corner development has the same approved capacity. But Broen said the company won’t formally decide to go ahead with either project amid uncertainty created by government policies and heavy oil price discounts linked to pipeline export constraints.

Broen’s criticisms echo points raised by the Canadian Association of Petroleum Producers in its recent campaign to convince governments to restore investor confidence by cutting taxes and easing regulatory burdens.

CAPP has warned that there are about 50 changes to energy industry policies being contemplated by provincial and federal governments, including recently-proposed sweeping changes to the Canadian Environmental Assessment Agency and the National Energy Board, that are harming Canada’s reputation as a transparent and fair place to do business.

The CEO of Suncor Energy—the oilsands giant that operates Fort Hills and other developments around Fort McMurray—has also warned that “Canada needs to up its game” to attract investment away from the U.S.

But Steve Williams said Friday he was “greatly encouraged” by the discussions he had with the prime minister. The two men hugged as the visit wrapped up.

“The prime minister has taken the trouble to come here and spend some time with us and understand our challenges better. So I think we’re going to get some help,” Williams said.

During his visit to Fort Hills, Trudeau chatted with workers in the lunch room about carbon taxes and pipeline approvals. He then toured a heavy equipment shop and climbed atop a massive oilsands ore hauling truck.

Both Trudeau and Premier Rachel Notley have touted Alberta’s carbon tax imposed last year as a tradeoff for having pipeline projects go forward. Athabasca’s Broen said he doesn’t think that strategy is working.

He said the department agrees, however, that Ottawa needs to do more to help get the pipeline built.

—with files from Lauren Krugel in Fort McMurray