The Isthmus of Chignecto connects the Atlantic province to the rest of the country, but the narrow strip of land could sink beneath the waves within decades 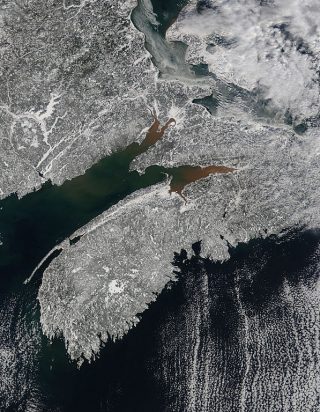 AMHERST, N.S.—Nova Scotia is at risk of becoming an island within decades if action is not taken to fix the 275-year-old dikes that prevent flooding of the isthmus connecting the province to the rest of Canada, officials warn.

Mayor David Kogon of Amherst, N.S., said sea levels are projected to rise in the Bay of Fundy over 15 to 20 years to the point where the Isthmus of Chignecto will flood, even without a storm surge.

The isthmus is a narrow, low-lying strip of land that is about 20 kilometres at its narrowest point.

“If the Isthmus of Chignecto, which is all that connects Nova Scotia to New Brunswick, is flooded out, then Nova Scotia will be surrounded by water,” said Kogon in an interview Thursday, adding that with the right storm the isthmus could flood sooner.

“If the highway and rail line are under water, you’ve completely cut Nova Scotia off from the rest of mainland Canada.”

The dikes in the Tantramar Marsh were built by Acadian settlers for agricultural purposes in the 1700s and urgent, multi-million-dollar upgrades are needed, said Kogon.

He said an estimated $50 million in trade flows through the isthmus daily via road and rail, and the Trans-Canada Highway and rail line are at risk.

Kogon, the warden of Nova Scotia’s Cumberland County, and the mayor of Sackville, N.B., have sent a letter to provincial and federal infrastructure ministers requesting a meeting to discuss the issue.

“The aging dikes combined with documented rising water levels and increased frequencies and intensity of weather events has led to new floodplain mapping. These clearly show that a flood that will breach the national rail and road networks is no longer a theoretical question—it is a matter of how soon it will occur,” said the Nov. 1 letter, signed by Kogon, Cumberland County Warden Al Gillis and Sackville Mayor John Higham.

The Isthmus of Chignecto was cut off for several days in an 1869 storm, according to a 2008 study by Memorial University geologist Norm Catto.

The study said the odds of a re-occurrence would increase as sea levels rise. Catto also said while no Nova Scotia community would be permanently submerged by rising sea levels, many would need to adapt.

A 2016 report by Ottawa’s Working Group on Adaptation and Climate Resilience noted that along with the highway and rail lines, electricity transmission lines on the isthmus are also at risk.

“Disruptions due to climate change (e.g., sea-level rise, storm surge) pose risks to these infrastructures and the economic activity they sustain. Trade flows through the isthmus, both by road and rail, carry an estimated value of $50 million per day and $20 billion annually,” it said.

Kogon said he was told during a recent meeting with federal politicians that fixing the dikes would fall under provincial jurisdiction, but he wants all three levels of government to work together. He said the first step would be an engineering study to determine the scope of the required repairs.

“This is of national significance. The hope is that the provinces and (Ottawa) will work together on this,” he said. “The cost involved in refurbishing and rebuilding the dikes is way beyond the scope of what a small-town municipality could do.”

He said the three municipal leaders have not yet received a reply to the letter, but they are meeting again Friday and plan on following up with the minister’s offices.

In an email statement, Infrastructure Canada confirmed it had received the letter and was assessing it.

Spokeswoman Nadine Archambault-Chapleau noted that Ottawa is creating a $2-billion Disaster Mitigation and Adaptation Fund, which is “designed to support investments that will mitigate current and future climate risks, such as floods, wildfires and droughts by building or reinforcing constructed and natural infrastructure.”

“More information is to come as this program is not yet launched, but could be a potential option for this project,” said Archambault-Chapleau.

In an emailed response, Nova Scotia’s Department of Transportation and Infrastructure Renewal said the province has been working with a number of groups and other levels of government to evaluate the potential impacts to the Isthmus of Chignecto.

The department said that in the Amherst area specifically, it was looking at options to reduce flooding potential and pointed out that $10 million has been spent to replace the Laplanche aboiteau for local farmland.

New Brunswick and Nova Scotia have submitted a joint proposal asking Ottawa to fund an engineering study, it said.

New Brunswick’s Department of Transportation and Infrastructure said in an emailed response it “recognizes the importance of the dikes in strategically protecting and maintaining public infrastructure.”

Spokeswoman Tanya Greer said it is working with the federal government and municipalities “to move this project forward,” and will develop a plan with the mayors.