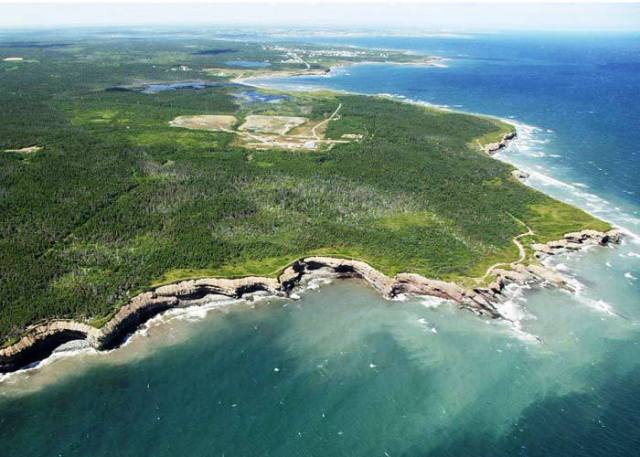 The coastal site of the Donkin coal mine about 30 kilometres from Sydney, Nova Scotia. Politicians say the proposed mine will help bolster the struggling Cape Breton economy. PHOTO: Morien Resources Corp

MEMBERTOU, N.S.—A potentially “groundbreaking” royalty deal between 11 Mi’kmaq chiefs in Nova Scotia and a coal mining giant for a proposed undersea coal mine may signal companies are more willing to share resource wealth with First Nations, an expert on aboriginal economic development says.

Harold Calla, executive chair of the First Nations Financial Management Board, says the accord between the Assembly of Nova Scotia Mi’kmaq Chiefs and Kameron Coal Management Ltd. is rare because it applies to bands in Nova Scotia located hundreds of kilometres from the mine site itself.

The Squamish band member and aboriginal accountant says the expanding law around the duty of companies to consult has encouraged companies to cut these kinds of deals—and First Nations are likely to continue pursuing them vigorously.

“This could very well be a groundbreaking kind of event that could be drawn upon by others,” he said in a telephone interview from Vancouver.

“What’s important in this is developing own source revenues … and creating revenue streams that you can leverage for economic development in your communities.”

Few details were available about the deal, but Chief Terrance Paul of Membertou First Nation said it will provide a significant flow of money from the subsidiary of the U.S.-based Cline Group to bands around the province who were party to the deal.

“It’s a lot of money per tonne and we have a reserve of over a billion tonnes here,” said the Cape Breton chief. “It’s significant for all the Mi’kmaq of Nova Scotia.”

He said a separate financial entity would be set up to receive the monies and distribute it to the bands who are part of the assembly.

Paul calls the deal historic, and adds he’s expecting the assembly will cut more such agreements with resource firms in the years to come.

The proposed Donkin mine has two shafts about eight metres wide that extends about three kilometres under the Atlantic Ocean, starting from a location about 30 kilometres east of Sydney.

While local politicians have welcomed the addition of jobs to the struggling Cape Breton economy, the proposal has been criticized by environmental groups as potentially adding to Canada’s contributions to greenhouse gas emissions.

Stephen Thomas, the energy issues co-ordinator at the Ecology Action Centre, said Canada is in an era of coal being phased out and being replaced by renewable sources that don’t add carbon to the atmosphere.

He said the environmental group supports First Nations receiving a fair share of resource developments but firmly opposes the project.

“We applaud Mi’kmaq being recognized and their unceded territoriy being recognized, but … the Donkin coal mine is not the right choice for Nova Scotians. We’ll have to disagree on this point today,” he said, adding that several large Mi’kmaq communities are not party to the deal.

Paul says the coal produced would meet regulatory standards and could replace coal that is being imported and burned in the province.

“The coal they’ll be burning will meet the standards … Close to half our energy comes from coal. Here we are standing on it and we’re buying it from overseas,” he said.