In August 2014, a massive breach at the B.C. site's tailings pond sent 24 million cubic meters of waste and water into nearby rivers and lakes 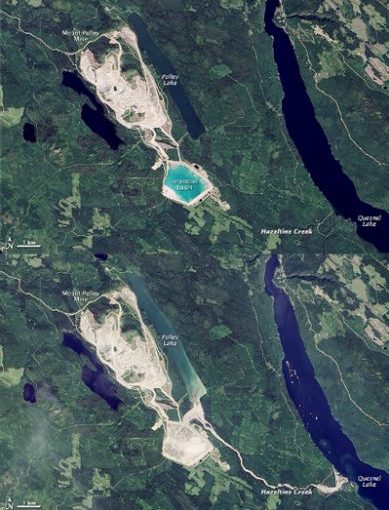 Satellite images of the site before and after the dam failure

VICTORIA—A gold and copper mine in British Columbia’s Interior is reopening nearly two years after its tailings pond collapsed, setting off an environmental disaster.

In August 2014, a massive breach at the Mount Polley Mine site sent 24 million cubic meters of waste and water into nearby rivers and lakes.

The province’s mines minister said Thursday that senior staff have authorized the mine to go back into full production, one year after it was approved for restricted operations.

“We do have more work to do, but we’re very deep into our overall effort in government to respond to this accident to ensure it can never happen again,” Bill Bennett said June 23 over teleconference.

He said he expects the reopening of the mine, owned by Imperial Metals Corp., to be “welcome news” for surrounding communities, including Likely, Williams Lake, 100 Mile House and Quesnel.

In January 2015, an independent engineering investigation report concluded the dam failed because the strength and location of a layer of clay under the dam wasn’t taken into account during the design process.

It made 19 recommendations directed at the operator, the mining industry, professional groups and the government regulator to prevent another such disaster.

Numerous environmental impact reports conducted after the spill found that concentrations of metals in fish were similar to those in fish elsewhere and surface water tests showed it to be non-toxic.

Bennett said the ministry has completed all the work advised by the independent panel. He listed several measures undertaken to strengthen the tailings storage facility, including extensive drilling to determine there is no more unstable clay.

He reiterated that prior to the accident, neither the company, the regulator, nor engineers knew about the unstable clay. The margin of safety was too narrow because of that unknown, he said.

“So our approach now is to widen … that margin of risk and make sure if there is something that even the experts don’t know about, that the dam is stable enough.”

The minister also addressed a critical report released early May by B.C.’s auditor general that concluded government is not prepared to protect the environment from potential disasters in the mining industry.

“(We were) criticized for not enough collaboration and communication,” he said. “We’re going to fix that.”

The review was completed by at least two external, senior geotechnical engineers, she said.

“Both found that the proposed design of the repaired tailings storage facility met appropriate engineering design standards for the intended purpose of the tailings facility,” she said.

The company has also created an independent board to oversee all aspects of the tailings storage facility.

It must also submit a draft technical assessment report on the long-term water management plan by the end of June.

One more independent investigation into the disaster, lead by the province’s Conservation Officer Service, is still ongoing, Bennett said. The RCMP and federal Department of Fisheries and Oceans are also part of the investigation.

Bennett said the police investigation is examining whether charges should be laid.

Under Imperial Metal’s permit, the mine is approved to process up to 22,450 metric tonnes of ore per day.