Some delegates at the World Economic Forum in Davos, Switzerland suggest U.S. President Donald Trump will face a far colder reception than he probably anticipates 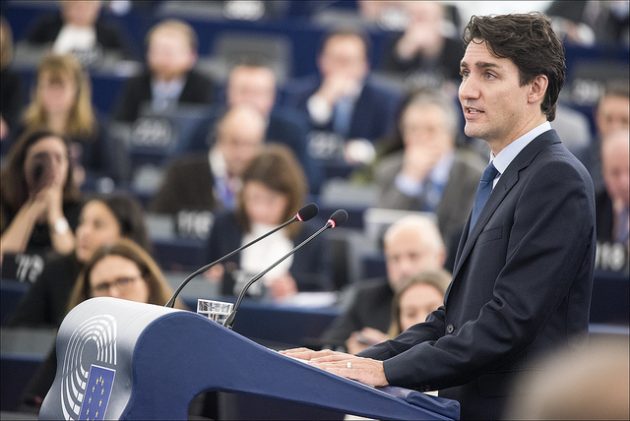 Justin Trudeau is but one of many world leaders emphasizing the importance of trade. PHOTO: European Union 2017 – European Parliament/Flickr

DAVOS, Switzerland—The World Economic Forum in Davos, Switzerland, is meantto be a place for the world’s decision-makers to put their power to good use. The theme this year is “Creating a Shared Future in Fractured World,” an ambition not likely to turn up on the U.S. president’s Twitter feed.

Instead, Trump will bring his zero-sum message of “America First,” and will speak last among the parade of world leaders—from places like India, France and Canada—who are gathering from Tuesday to Friday in the Swiss snows.

As with most things Trump, there are stark contrasts between how attendees view his visit. Some are happy and hope for dialogue. Others unabashedly say they wish he would stay away and accuse him of a lack of compassion and vision for the world that are out of place in Davos.

“I find it quite sad he’s coming to the WEF, but I imagine nothing can be done about it,” said Buddhist monk Matthieu Ricard, a longtime disciple of the Dalai Lama.

While his trip may seem incongruous or unwelcome, he will be sticking to one key aspect of the WEF’s ambition in starting the annual forum in Davos 47 years ago: Business. An array of Cabinet officials is due to tag along, suggesting the U.S. is preparing a big economic and diplomatic push.

Some have suggested it’s ironic that Trump, a self-styled populist despite his penchant for the penthouse, is attending the elite event. Others speculated he could have felt a need to regain the Davos spotlight for the United States a year after Chinese President Xi Jinping stole the show by casting China as a champion of free trade and stability.

An administration official said Trump is expected to tout the booming U.S. economy and measures like his recent tax overhaul, while again criticizing trade practices that he sees as unfair toward the U.S. The official, who spoke only on condition of anonymity to discuss internal plans, said Trump made the decision to go because he thinks he has a positive economic message.

With Wall Street surging, Trump has some cheerleaders on the economic front, even if they hope he’ll be more accommodating.

“I think it’s really good that he’s going,” said Bill Thomas, chairman of business services KPMG International. “The American economy is dependent on global engagement, and I think he’s in Davos because he knows that.”

Some wonder whether Trump can win over the Davos set, or whether they might succeed in turning his ear—and give him a chance to reboot his administration’s image abroad.

“Corporate America, in terms of economic policies, is very pleased with the way the administration is going,” said Andy Baldwin, a managing partner for financial services firm EY. But he acknowledged that Trump controversies elsewhere had “overshadowed some of the policies.”

The hosts were also upbeat.

“It’s good to have the president here, if the snow conditions and the situation in Washington allow us,” WEF founder Klaus Schwab said in an interview Monday, alluding to the government shutdown. The White House has said it’s monitoring the situation day to day, and Schwab said: “At the moment we cannot make a comment on that (Trump’s attendance).”

Outside of business, though—whether among human rights advocates, environmentalists, peaceniks or free-trade proponents—Trump is shunned.

“Despite its formal name, Davos is about more than economics,” said Kenneth Roth, executive director of Human Rights Watch, in an email. “So while Trump undoubtedly intends to trumpet U.S. economic progress, many Davos participants will question his racist, misogynistic, and xenophobic rhetoric and policies.”

“Unless he plans an unexpected apology and reversal, he will face a far colder reception than he probably anticipates,” he said.

Parts of the jet-set have it in for Trump. Elton John, whose song title “Rocket Man” Trump used to deride North Korean leader Kim Jong Un, will be in Davos, as will actress Cate Blanchett, who shaped chewing gum into a phallus on late-night TV to mock Trump just days after he took office. So will several African leaders whose countries Trump allegedly dismissed with a vulgarity this month.

Small protests have started, and another was expected in Zurich on Tuesday. But Davos authorities rejected a request by left-wing groups to hold a demonstration in the village on Thursday, the day before Trump’s speech, insisting that space was too tight because of heavy snowfall.

A Swiss anti-Trump petition has garnered more than 16,000 supporters online, calling on him to stay away.

Some might see a snub in French President Emmanuel Macron’s decision to not stick around to see Trump even though the White House initially had announced a face-to-face meeting in Davos.

In his speech Wednesday, Macron is expected to offer a “lucid” diagnosis about globalization, and raise environmental concerns, an adviser said. Macron’s speech could shape up as a counter narrative, and though he wasn’t expected to mention Trump by name “you can read between the lines,” the adviser said, on condition of anonymity because he was not authorized to speak publicly about the matter.

Trump has, in a way, already been on hand in Davos. During last year’s event, which coincided with his inauguration, many attendees gawked at TV screens as Trump declared “America First” from the Capitol steps.

When he arrives this year, discretion may be the order of the day: Zurich airport, the closest big hub, has announced a lockdown on press access for the arrival of Air Force One.

Swiss police are deploying more than 4,300 troops in the region for security, which officials say is on a par with previous years. But this being only the second visit by a serving U.S. president, after Bill Clinton in 2000, has also meant enhanced security measures.

Switzerland’s Young Socialists party was revving up for the Tuesday protest in Zurich.

Tamara Funiciello, the group’s president, also took aim at Swiss authorities for refusing to allow the Davos demonstration, which the Young Socialists were helping to organize.

“It’s scandalous!” she said, insisting that the authorities could have made space if they really wanted to. “It’s a lack of democracy, and is their way of hiding behind the global elites … They need stronger spines.”

Catherine Lucey in Washington, Angela Charlton in Paris, and Pan Pylas and Masha Macpherson in Davos, Switzerland, contributed to this report.