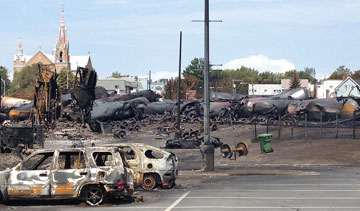 TSB chair Wendy Tadros says 18 factors played a role in the Lac-Megantic accident, including the fact that about one-third of the derailed tanker cars had large breaches. PHOTO Transportation Safety Board of Canada

LAC-MEGANTIC,Que.—The Transportation Safety Board of Canada says many factors contributed to the Lac-Megantic train derailment in 2013, including lax safety measures at the company that owned the runaway train.

The TSB says Montreal, Maine and Atlantic Railway had a weak safety culture and did not have a functioning system to manage risks.

The agency is also pointing a finger in its final report at Transport Canada, saying the department did not audit MMA often and thoroughly enough to ensure it was effectively managing the risks in its operations.

Agency officials held a news conference in Lac-Megantic this morning to release the report into the tragedy, which killed 47 people.

TSB chair Wendy Tadros says 18 factors played a role in the accident, including the fact that about one-third of the derailed tanker cars had large breaches which rapidly released vast quantities of highly volatile petroleum crude oil.

The disaster destroyed a swath of the community’s downtown and spewed millions of litres of crude oil into the environment.

It was sparked when the train careened into the town shortly after 1 a.m. on July 6, 2013, and jumped the tracks, exploding into fireballs that were spotted by satellites in space.

People are still being treated for post-traumatic stress, while efforts to rebuild are still underway in the aftermath of what the safety board described as potentially the worst disaster of its type in Canadian history.

In May, the Montreal, Maine and Atlantic Canada Co. and three of its employees were charged by Quebec prosecutors with 47 counts of criminal negligence causing death.

Class-action lawsuits are pending and there are also demands for an independent inquiry.

The TSB said at the time of the derailment it would take months to investigate but took the unusual step about two weeks later of recommending immediate changes to rail safety.

It urged that dangerous goods should not be left unattended on a main track and that rail equipment be properly secured.

Transport Canada issued directives on July 23, 2013, that at least two crew members must work on trains that carry dangerous goods and that no locomotive attached to one or more tank cars carrying dangerous goods can be left unattended on a main track.

The Lac-Megantic train had been left unattended by its sole crewman, its engineer, while he rested for the night at a nearby hotel. Early reports said the train’s brakes became disabled, allowing it to roll into the town.

The TSB said last year as its investigation progressed that the crude oil carried by the train was as volatile as gasoline but had been labelled as a less-dangerous product similar to diesel or bunker crude.

Montreal, Maine and Atlantic Railway, which had filed for bankruptcy protection, was sold in January in a closed-door auction for $15.85 million. The buyer was later revealed to be Railroad Acquisition Holdings, an affiliate of New York-based Fortress Investment Group.

Government and industry have continued to tighten rail regulations since the tragedy.

The federal government pledged in April to pull all old, rupture-prone tank cars, known as DOT-111s, off Canada’s rails in the next few years.

Millions of dollars have been pledged to rebuild Lac-Megantic. The federal and Quebec governments have said they will split the cost.