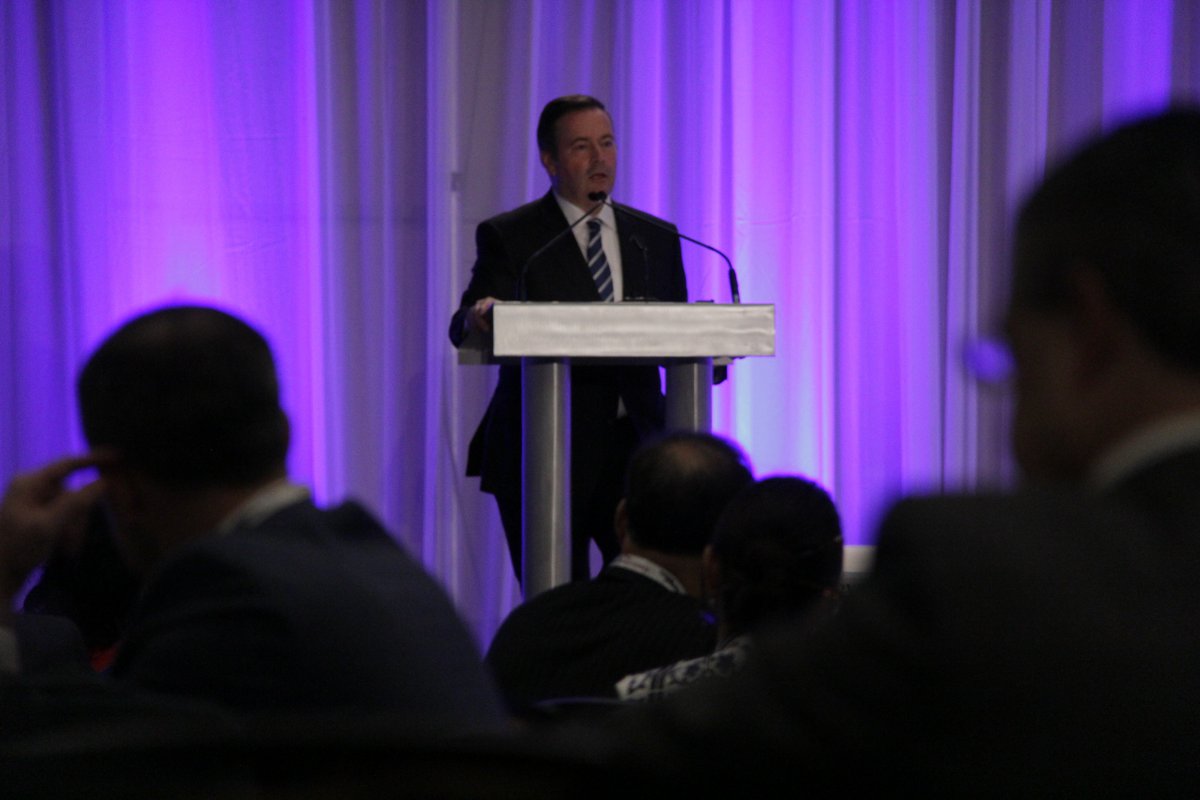 CALGARY—The United Conservatives are promising to get Alberta’s books out of the red and into a $714-million surplus by 2023—a year earlier than the NDP.

The party also says if it wins the spring election, it will raise Alberta’s debt level to $86 billion over that time period, a figure that is well below current government projections.

“This is a very mainstream, balanced approach to gradually getting to balance without any absolute reductions in spending,” UCP Leader Jason Kenney told reporters Saturday.

“But we will only get there if we grow the economy.”

Kenney made the comments after the party rolled out more details of its party platform, including the budget details and a plan to replace the current carbon tax on consumers with a levy on heavy industrial emitters of greenhouse gases.

The UCP is focusing on the economy and job creation in its election platform, but says it will take time to dig out from under the multibillion-dollar deficits run up over the last four years by Premier Rachel Notley’s NDP.

The UCP expects that revenues from oil and gas royalties will be lower than projected by the NDP, but by keeping spending hikes to about 0.3 per cent per year, coupled with job creation incentives such as slashing the corporate tax, they can get to balance before the end of its first term in government.

The UCP projects that if it wins the election, the budget for 2019-20 would show a $7.4 billion deficit, including borrowing to pay for operations.

It says that would be followed by a $6.6-billion deficit the following year, then $4 billion in the red, before finally the $714-million surplus in the 2022-23 fiscal year.

The NDP is projecting a $6.9 billion deficit for the current fiscal year, which ends this month.

It did not introduce a budget for 2019-20 before calling the election two weeks ago, but the government did put out a long-term financial outlook last month as part of its latest budget update.

In that report, it stated that even with keeping spending growth at three per cent per year, a growing and diversifying economy coupled with low taxes will deliver a $900-million budget surplus by 2024.

Both parties are pinning their budget-balancing promises on strong economic growth year over year. But besides that, there’s little the two sides agree on, starting with the debt level.

The debt will reach almost $57 billion this year and the government predicts it will reach $95 billion by 2024.

But the UCP, relying on economic consulting firm Stokes Economics, says the NDP has grossly inflated revenue projections by almost $9 billion over the next few years and that the real debt total by 2024 will be $101 billion.

The two sides also don’t agree on what the average price will be for oil and gas, which remain Alberta’s foundational revenue generator.

The NDP predicts the West Texas Intermediate benchmark average price for North American oil will be US$59 a barrel in 2019-20, rising to US$70 a barrel by 2022-23. But the UCP predicts the WTI will start at about US$55 barrel and then climb to just under US$62 over that same time period.

In this budget year, the government predicts total spending will be $56.6 billion and total revenue will be $49.6 billion.

On the growth side, the NDP has focused on keeping taxes low while delivering tax credits and other incentives to create more oil refining in Alberta while growing industries such as high-tech.

Kenney’s party is taking a broader, more hands-off approach, promising to cut the corporate tax by a third, to eight per cent, and pledging to reduce administrative red tape.

“Jason Kenney wants Albertans to believe he can ride to the rescue with billions in tax breaks for corporations, and the economy will magically diversify itself,” said Hoffman in a statement.

“Albertans are seeing Kenney’s corporate tax scheme for what it is: Help for those who need it least, and a whole lot of hurt for everyone else.”

The election is almost at the halfway point, with voting day set for April 16.

Kenney also released more details on his previously announced commitment to end the carbon tax and replace it with a program targeting large emitters of greenhouse gases.

The new program would be titled Technology Innovation and Emissions Reductions, or TIER, and take effect Jan. 1, 2020.

It is similar to the old Specified Gas Emitters Regulation program launched by the Progressive Conservatives in 2007, and replaced by the NDP in 2018.

Under the plan, facilities with emissions higher than 100,000 tonnes of carbon dioxide will have to reduce the intensity of those emissions starting at 10 per cent and gradually increasing year over year.

If not, they can buy credits or offsets, or pay into a fund that will study ways to reduce GHG emissions.