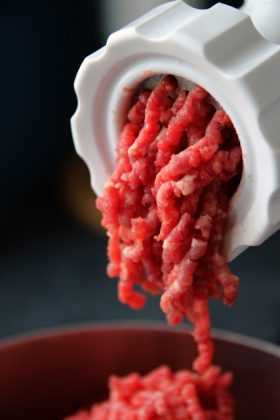 OTTAWA—The federal government has approved the sale of ground beef that has been treated with radiant energy similar to X-rays.

Health Canada says irradiation can reduce levels of harmful bacteria such as E. coli and salmonella that could be in the meat.

“Health Canada developed the new regulation after conducting a thorough assessment and concluded that irradiation is a safe and effective treatment to reduce harmful bacteria in ground beef,” the department said in a release Feb. 22.

“Irradiation is an optional tool that the food industry can use to treat certain foods to maintain quality or enhance safety.”

Under the new regulation, irradiated ground beef products must be labelled as such and include the international on packaging. The symbol is usually green and resembles a plant within a circle.

Health Canada noted that the United States has permitted the irradiation of ground beef products since 1999. Canada’s beef cattle industry has been asking the Canadian government to approve ground beef irradiation since 1998.

Irradiation is already used in Canada to treat potatoes, onions, wheat, flour, spices and some seasonings.

“It is essentially an extra food safety measure. When you add it to all of the other things that we do today … it could essentially eliminate illness from E. coli 0157,” he said from Strathmore, Alta.

“We are serving hundreds of millions of beef servings. If we can go from a few cases of E. coli 0157 to none—that is where we want to be as an industry.”

Klassen compared the health benefits of irradiated beef to the effect of milk pasteurization at the beginning of the last century.

The association renewed its call for beef irradiation following an extensive recall of beef products during the fall of 2012. E. coli linked to a former XL Foods plant in Alberta sickened 18 people in British Columbia, Quebec, Alberta and Newfoundland and Labrador.

Klassen said it will take about a year for the industry to provide irradiated ground beef to consumers. Supply will depend on demand.

The department said it will consider requests to allow for the sale of other irradiated meat products based on the same review rules it used for ground beef.