A blocked drain pipe and several days of rain saturated the ground beneath the track, causing the roadbed to collapse and the train to derail, according to the Transportation Safety Board of Canada 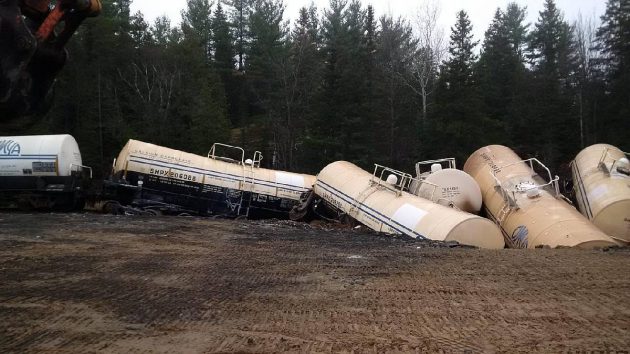 GATINEAU, Que.—A Northern Ontario train derailment is being blamed on poor track conditions and the failure of inspectors to recognize these risks.

On Mar. 8, The Transportation Safety Board of Canada (TSB) released its investigation report into a 2015 Huron Central Railway (HCRY) train derailment near Spanish, Ont.—a town west of Sudbury.

On Nov. 1 2015, an HCRY freight train was traveling westward at 25 mph when the emergency brakes were applied. Two separate groups of equipment derailed, destroying about 225 feet of roadbed. No dangerous goods were involved and there were no injuries.

The investigation also determined that HCRY’s track inspection and maintenance program was not effective in dealing with various track infrastructure issues, such as drainage, track instability and rail joint defects.

In this situation, a blocked drain pipe had resulted in inadequate drainage over several days of rain, allowing water to pool, migrate through the railway embankment and saturate the ground beneath the track. A large number of defective rail joints were also allowed to remain in service without performing follow-up inspections.

TSB says that if track inspectors are not provided with appropriate training on ground hazards such as inadequate drainage, unstable ground conditions may not be detected in a timely manner, increasing the risk of derailment due to track conditions.

Following the accident, slow orders were issued for any identified track defects on the affected section, and the defects were repaired.

HRCY is a provincially regulated railway that runs between Sault Ste. Marie and Sudbury.