by Joan Bryden and Keith Doucette, The Canadian Press  April 23, 2018

Liberal party members are pushing the government to tackle issues like pharmacare, prostitution and illegal drugs to court progressive voters away from the NDP in the 2019 federal election 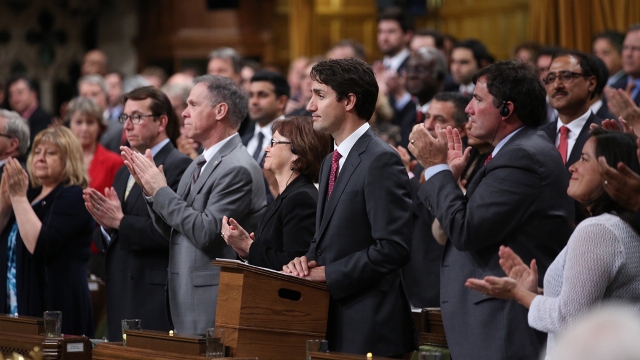 While Liberal backbenchers and grassroots activists want their party to own progressive causes, Trudeau and his ministers want the party rank and file to get behind the controversial Trans Mountain pipeline project. PHOTO: Government of Canada

HALIFAX—Prime Minister Justin Trudeau’s government is being pushed by backbenchers and grassroots Liberals to take a more progressive stance on issues such as pharmacare, prostitution and illegal drugs.

The pressure came Friday during the first full day of the Liberals’ national convention and it was motivated, at least in part, by a determination not to be outflanked by the NDP in the battle for progressive voters in next year’s federal election.

At the same time, however, Trudeau’s ministers were applying some pressure of their own—urging party faithful to get out and sell the government’s support for the controversial Trans Mountain pipeline expansion in the face of opposition from environmentalists, some Indigenous groups and British Columbia’s NDP government.

One resolution, proposed by the national caucus, calls for the country’s universal health-care system to be expanded to include coverage of prescription drugs, echoing a call by the Commons health committee last week.

But Oakville MP John Oliver, a member of the health committee, warned that the fight for pharmacare is not a done deal and he urged delegates to support the resolution to send a message to the Prime Minister’s Office.

“I think it’s so important that Liberals own this issue, we don’t let the NDP own it. We need to own it as Liberals, it’s got to come out of this convention as the No. 1 priority.”

New Democrats approved a resolution on national pharmacare at their recent convention.

Oliver warned that “very powerful lobby groups”, including the big pharmaceutical companies and insurance companies, will fight a universal pharmacare plan. And he said there will be “all kinds of other people resisting it”—not mentioning that Morneau himself initially talked about strictly providing drug coverage for Canadians who aren’t already covered by private drug plans.

Another resolution proposed by the caucus calls on the government to decriminalize simple possession and consumption of all illicit drugs, adopting a model similar to that used in Portugal where the emphasis is on getting drug users into treatment.

Health Minister Ginette Petitpas Taylor reiterated Friday that Canada and Portugal are very different countries. And she noted that Trudeau has been clear that legalizing recreational marijuana is as far as he’s prepared to go in removing the criminal prohibition on drug use.

But Toronto MP Nathaniel Erskine-Smith urged grassroots Liberals not to take no for an answer.

At another workshop, there was little evidence of support for a resolution calling for the decriminalization of prostitution, proposed by the party’s youth commission.

But Young Liberal president Mira Ahmad said it’s very popular among youth delegates, who make up almost one third of the roughly 3,000 Liberals at the convention.

“Youth have a history of challenging the party status quo and pushing for progressive policies,” she said after the workshop, conceding that “Some Liberals may not like it.”

Justice Minister Jody Wilson-Raybould said the government is already considering decriminalization, among other options, for dealing with the sex trade.

Wilson-Raybould also indicated that she’s open to listening to arguments about decriminalizing all drugs, although she stressed her priority is cannabis, which is to be legalized this summer. However, she later clarified that “we are focused on cannabis and we are not moving forward on any other decriminalization.”

The clarification was in line with Petitpas Taylor, the lead minister on the drug file who was decidedly cool to the idea. She warned that decriminalization “is not the silver-bullet solution” to the opioid crisis.

During a panel discussion on the environment and the economy, Environment Minister Catherine McKenna appealed to delegates to back the government’s determination to see the Trans Mountain pipeline expanded. Getting bitumen from Alberta’s oil sands to tidewater in B.C. is part of the balance the government is trying to strike, protecting the environment and reducing carbon emissions while still growing the economy, she argued.

“We have to stop the polarization,” McKenna said.

“That’s why I need you to stand up and support what we are doing to take action on climate change and also support projects that make sense in getting resources to market.”

Outside the convention, a handful of protesters denounced the pipeline and the government’s environmental policy in general. And inside, Natural Resources Minister Jim Carr acknowledged that some Liberals are also likely uneasy about the pipeline.

“Within our party there will be those who think pipelines are not a great idea, but when they hear the arguments about the alternatives of moving the product by rail or by pipeline … I think they will see the position that we have taken.”

Carr said he’s not comfortable watching the Alberta and B.C. governments duke it out in public over the pipeline. But while he understands they’re standing up for their provincial interests, he said the federal government has another priority.

“There is only one government of Canada. We will be accountable for protecting the interests of the entire nation.”