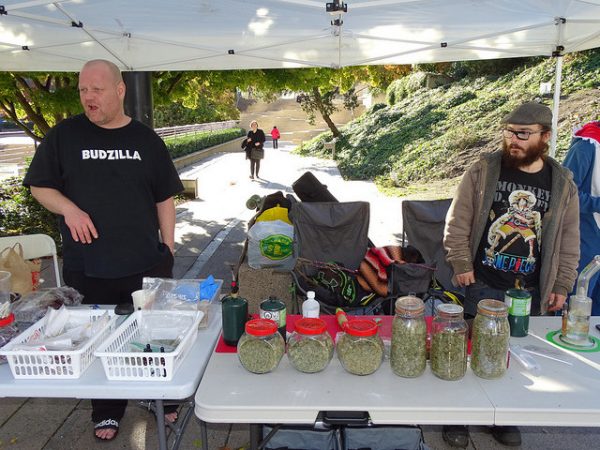 VANCOUVER – Cannabis connoisseurs in Vancouver have been able to buy potent weed over the counter for years – but ironically, that could change when marijuana becomes legal.

None of the long-standing pot shops in the city have received provincial licences to operate, with only two weeks left until legalization.

Jessika Villano, owner of Buddha Barn Craft Cannabis, said she applied for a licence one week after the application portal opened in August and doesn’t expect approval before Oct. 17.

“We’re doing everything that we can to comply with all three levels of government. We’re still nervous. We still haven’t received that golden ticket.”

Vancouver became a haven for illegal pot shops after the city – in an effort to ensure access for medical marijuana patients – decided not to police the stores unless there were public safety concerns, such as gang affiliations or sales to minors.

By 2015, more than 100 dispensaries had sprung up, prompting council to pass a bylaw requiring shops to obtain a development permit, a $30,000 business licence and obey location rules. So called compassion clubs – non-profits that provide medical pot to patients in need – paid only $1,000 for a licence.

The business licence scheme didn’t change the fact that selling cannabis across the counter was illegal in Canada.

It did, however, allow the city to keep track of stores and issue tickets to those that flouted its rules, with limited success.

Today, there are 19 pot shops operating with a municipal business licence in Vancouver, including four compassion clubs, while 53 locations hold a development permit. Dozens of others have flouted the bylaw, prompting the city to launch a court case in which a decision has not yet been issued.

Regardless, the entire system changes on Oct. 17 and – if the law is enforced – Vancouver could go from being Canada’s most pot-friendly city to one of its least.

In July, the city updated its bylaw to align with legalization. Any dispensary with a previously issued business or compassion club licence must apply for a provincial retail licence and a new municipal business licence.

As part of the process to obtain a provincial licence, B.C. forwards the application to the city for recommendation of approval. Once the provincial licence is granted, the city contacts the operator to apply for a new municipal business licence.

“To date, the city has received four applications from the province,” said chief licence inspector Kathryn Holm. “To date, no operator in Vancouver has been issued a provincial or municipal cannabis business licence to operate legally as of Oct. 17.”

British Columbia has said the only government-run cannabis store ready on Oct. 17 will be in Kamloops. There will also be an online store. But it’s unclear whether any private brick-and-mortar stores will be approved by that date.

A spokesman for the Attorney General’s office refused to say how many applications had been forwarded to cities for approval, citing “private business information” between applicants and the province.

Some Vancouver dispensaries plan to stay open regardless of whether their provincial licence applications are approved.

Don Briere, owner of four Weeds Glass and Gifts stores, said his customers include cancer patients and people with severe pain. Closing his doors would force them onto opioids or into the black market, he said.

“Can you imagine the airport – you would be parking planes on the freeway – and the lines to get into Kamloops … if every person who consumed cannabis had to go to Kamloops?”

All the existing pot shops in Vancouver are ostensibly medical cannabis dispensaries. While some require proof of a health condition, others, including Briere’s stores, sell to any adult who wants weed for any reason.

The province has only created a non-medical retail licence, requiring genuine medical dispensaries to become recreational retailers if they want to survive. Compassion clubs that previously paid $1,000 for a city licence won’t be allowed to sell pot unless they obtain a provincial licence and a $30,000 municipal business licence.

Villano’s store used to be called Buddha Barn Medicinal Society but is rebranding as Buddha Barn Craft Cannabis to comply with provincial rules that don’t allow retailers to use medical language.

She’s also trying to sell off all her organic, lab-tested marijuana flower from local cannabis growers, which won’t be included in the provincial supply chain. One of her products is specifically created for cancer patients.

“It’s not a fun cannabis to use. It’s definitely therapeutic. We won’t be able to put that on our shelves through this next little while,” she said. “That part’s a bit scary for people who are fighting for their lives.”

Whether unlicensed pot shops in Vancouver shut their doors will largely depend on enforcement, which will be a provincial responsibility.

“Unlicensed retailers may not be shut down overnight,” the Public Safety Ministry said in a statement. “The province anticipates many illegal dispensaries will voluntarily come into compliance with the law by obtaining a retail licence, or shutting down.”

It said it’s setting up a new unit that has the power to enter illegal cannabis premises without a warrant, seize illegal products and records, and impose fines.

Illegal stores could face provincial and federal charges, it added. Those convicted of the provincial offence of illegally selling cannabis will face fines of up to $100,000 and up to 12 months imprisonment.