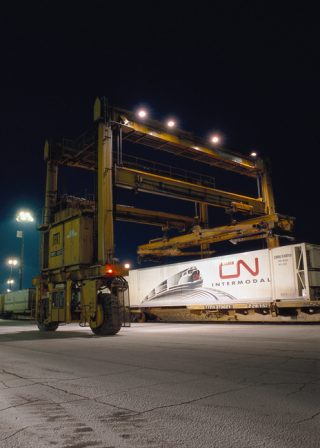 The intermodal hub would allow CN to move more freight across the GTHA, but Milton residents have expressed skepticism about the project. PHOTO: CN

Announced last year, the $250 million hub would serve as a rail-to-truck terminal and allow CN to move more freight in and out of the Greater Toronto Hamilton Area. Canada’s largest railway says the project would create as many as 1,000 jobs throughout construction and has maintained the intermodal terminal is good for the region.

The proposed project has met local opposition from residents and political leaders in Milton, however, who have voiced concern over property values, increased truck traffic and city growth plans.

CN submitted its Environmental Impact Statement to the Canadian Environmental Assessment Agency (CEAA) in January, and the environmental regulator, as well as the Canadian Transportation Agency are now inviting comments from the public, Indigenous groups and governments on the project. The CEAA will accept comments until July 11.

The logistics hub requires the construction of a rail yard with 20 kilometres of track. A 1.7-kilometre private road designed to minimize the terminal’s impact on the city’s commuters is also included in the plans.