Union looking to halt contentious privatization of publicly-owned utility; so far, the province has sold off about 30 per cent of Hydro One 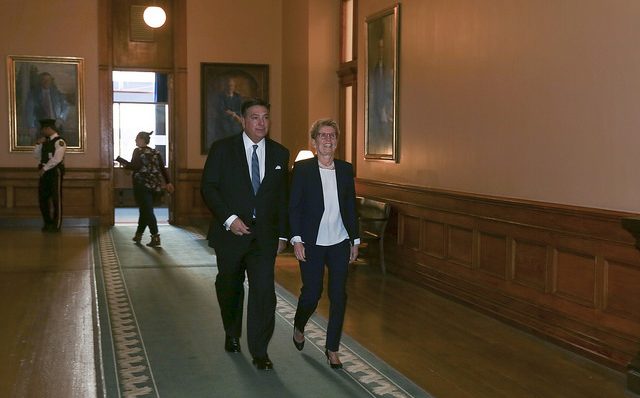 TORONTO—The Canadian Union of Public Employees says its lawsuit against the Ontario premier and two cabinet ministers over the sale of Hydro One is finally headed to court.

CUPE Ontario president Fred Hahn says the suit is aimed at stopping the sale of any more shares in the giant electricity transmission utility while the province is still the majority shareholder.

The government has already sold about 30 per cent of the shares in Hydro One, and plans to sell another 30 per cent to raise billions of dollars to pay down debt and to fund public transit and infrastructure projects.

In September, CUPE served the Ministry of the Attorney General with a notice of intent to sue Premier Kathleen Wynne, Finance Minister Charles Sousa and former Energy Minister Bob Chiarelli for misfeasance.

The union claims the Liberals inappropriately mixed government and party business by holding fundraisers with cabinet ministers, including one $7,500-a-ticket event with Sousa and Chiarelli that was attended by bankers who profited from the privatization of Hydro One.

Wynne says the province’s integrity commissioner looked into the issue and confirmed that there was no wrongdoing.

“The integrity commissioner has already made a pronouncement on the issue that is being taken to the court,” Wynne said Wednesday following a Toronto transit announcement. “I can’t comment on that court case, but what I can say is that broadening the ownership of Hydro One has everything to do with investing in the infrastructure projects that we’re talking about here today.”

Integrity Commissioner J. David Wake found that Sousa and Chiarelli may have benefited politically by attending the fundraiser with bankers involved with the sale of Hydro One, but they didn’t contravene the Members’ Integrity Act.

Hydro One also serves as a local electricity distribution company for 1.3 million homes in remote and rural parts of Ontario.