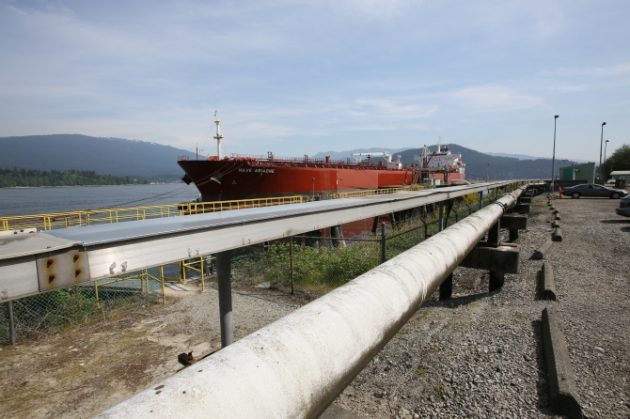 VANCOUVER—The Federal Court of Appeal has overturned Ottawa’s approval of the contentious Trans Mountain pipeline expansion, but Finance Minister Bill Morneau is pledging to push ahead with his government’s purchase of the project.

In a unanimous decision by a panel of three judges, the court says the National Energy Board’s review of the proposal was so flawed that the federal government could not rely on it as a basis for its decision to approve the expansion.

The court also concludes that the federal government failed in its duty to engage in meaningful consultations with First Nations before giving the project the green light.

Prime Minister Justin Trudeau’s government approved the project in 2016 and is so determined to see the line built that it announced plans this spring to buy the pipeline and expansion project for $4.5 billion after Kinder Morgan Canada balked at moving ahead with construction.

Shortly after the court ruling Thursday, company shareholders voted more than 99 per cent in favour of the sale.

Even with the court decision, Morneau said the project is in the national interest and needs to go ahead.

“Taken together, today’s decisions from the Federal Court of Appeal and Kinder Morgan shareholders are important next steps in getting this project built in the right way for the benefit of all Canadians,” he said in Toronto.

“As we move ahead with the project and the purchase, our government remains committed to ensuring the project proceeds in a manner that protects the public interest. That means ensuring the highest level over governance—including environmental protection. It means upholding or commitments with Indigenous peoples and it means responsibly protecting Canada’s and Canadians’ investment.”

Conservative Leader Andrew Scheer said the decision is “devastating news for energy workers across Canada and for Canadian taxpayers.”

“Here we are, well into this process, and the Trudeau government has no plan whatsoever to get Trans Mountain built,” he said in Winnipeg.

“Clearly, the ruling indicated that the Trudeau government could not even follow its own process, that it failed to hit the standards that it had imposed for itself. That is extremely alarming.”

The ruling requires the energy board to conduct a new review—which the court suggests could be kept short—and means the government will have to redo part of its consultation with Indigenous groups.

The court combined into one case nearly two dozen lawsuits calling for the energy board’s review to be overturned.

First Nations, including the Tsleil-Waututh and Squamish on British Columbia’s south coast, argued that Ottawa did not adequately consult them before the review or the cabinet decision to approve the project.

The court found that the government’s representatives “limited their mandate to listening to and recording the concerns of the Indigenous applicants and then transmitting those concerns to the decision-makers.” There was no “meaningful two-way dialogue.”

The Squamish Nation cheered the ruling as a recognition of Indigenous rights.

“This decision reinforces our belief that the Trans Mountain expansion project must not proceed and we tell the prime minister to start listening and put an end to this type of relationship. It is time for Prime Minister Trudeau to do the right thing,” the band said in a statement.

The Coldwater Indian Band, which asserts traditional territories in south-central B.C., said the pipeline route passes an aquifer that is the sole supply of drinking water for its main reserve

“This is a major victory for my community,” said Coldwater Chief Lee Spahan. “Thankfully, the court has stepped in where Canada has failed to protect and respect our rights and our water.”

Environmental groups and the cities of Vancouver and Burnaby also challenged the project in Federal Court last fall. They were supported by the province of British Columbia, which acted as an intervener.

Alberta was also an intervener and the province’s lawyer told the court Ottawa’s decision to approve the pipeline expansion was based on broad evidence that considered environmental, economic and Indigenous interests.

The expansion would triple the capacity of the Trans Mountain pipeline from near Edmonton to Burnaby, B.C., to 890,000 barrels a day. It would also increase the number of tankers in Burrard Inlet sevenfold.

That failure “was so critical that the Governor in Council could not functionally make the kind of assessment of the project’s environmental effects and the public interest that the (environmental assessment) legislation requires,” says the ruling written by Justice Eleanor Dawson.

B.C. Premier John Horgan says the province will continue with its reference case to the B.C. Court of Appeal to determine if it has the right to protect its environment from the impact of a bitumen spill by regulating the transportation of hazardous substances inside provincial borders.

“I believe the arguments about where the environment rests in terms of jurisdiction in Canada is still important,” he told a news conference in Victoria, adding the province could also pursue intervener status at any future National Energy Board hearing on the project that considers the marine environment.

Horgan stopped short of saying the project is dead, but he said his government will now focus on other issues, such as housing and jobs.

“Certainly it is something that will no longer be top of mind for British Columbians,” he said.

Since the NDP came to power last summer, Horgan said B.C. has used the rule of law to argue its position against the pipeline.

“I think what I am most satisfied with is that when we formed a government, we looked at what were the practical things we could do within the context of the Canadian family to make our arguments and I think that we’ve done that effectively.”

“This decision is a monumental win for the rights of Indigenous Peoples and all of us who stand with them in firm opposition to a project that would massively increase climate pollution and put our coast at huge risk of oil spills,” Robertson said in a statement.

Ecojustice, the Living Oceans Society and the Raincoast Conservation Foundation called the ruling a “critical win” for the climate and coastal ecosystems.

“Going forward, we urge politicians and other project proponents to shift their focus away from projects that lock us into dependence on fossil fuels,” Ecojustice lawyer Dyna Tuytel said.

With as few as 75 southern resident orcas left, the population will be unsustainable if the project proceeds, said Paul Paquet, senior scientist with the Raincoast Conservation Foundation.

“The court has sent a clear signal that the rule of law will not accommodate environmental decision-making that fails to address these environmental risks,” he said.

The Federal Court case was the most significant legal challenge facing the project and the decision may still be appealed to the Supreme Court of Canada.

Kinder Morgan had already won several court victories, including one last week when the Supreme Court of Canada dismissed an application from the City of Burnaby to overturn a lower court decision.