New regulations will force U.S. railways to spend billions on new technology designed to prevent crashes next year. In Canada, implementation is on hold 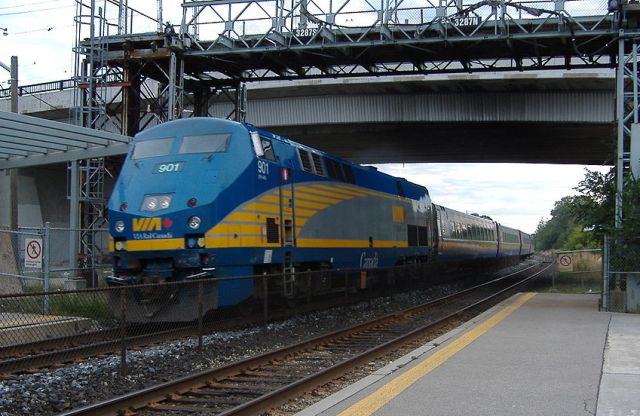 New devices are designed to prevent crashes on both passenger and freight lines. But Canadian critics say the technology is still evolving. PHOTO: Andrew Dolch/Wikimedia

MONTREAL—Canada’s railway industry is waiting for the development of better technology before installing devices in this country that could slow trains to prevent accidents like the recent Amtrak derailment that killed three people and injured dozens.

Gerald Gauthier, acting president of the Railway Association of Canada, says the enhanced train control systems that must be installed by railways operating in the United States next year are costly, unproven technology.

“We want this to happen but we have to make sure that we have a technology that won’t fail us and before putting on something that would fail, we want to take our time and come up with the right solution,” he said in an interview.

Canada has been studying ways to improve safety since a 2012 incident near Burlington, Ont., caused a Via passenger train to derail.

The industry has been working with Transport Canada and participated in a working group that concluded the best option would be a targeted, risk-based approach that varies according to train corridors.

“It was determined the U.S. approach taken in the legislated requirement for full-scale widespread positive train control is not the right fit for Canada,” said a department spokeswoman.

Transport Canada said the outcome of a study of enhanced train control systems being conducted by the Canadian Rail Research Laboratory of the University of Alberta will be published in the new year.

The Transportation Safety Board recommended after the 2012 derailment that major Canadian passenger and freight railways be required to implement “physical fail-safe train controls.”

These could include warning lights for conductors or systems that could automatically bring a train to a halt.

The U.S. mandated in 2008 that Class 1 freight railways and passenger trains develop and install what it called positive train control systems by the end of 2015. Congress passed a three-year extension after railways said they couldn’t meet the deadline.

The U.S. system is expected to cost more than US$14 billion to install, and hundreds of millions more annually to operate.

“Development of the new technology, particularly mission-critical software, has proven extremely challenging and taken longer than estimated,” he wrote.

Implementing similar technologies in Canada would run into many of the same issues along with challenges of track in remote locations and extreme weather conditions, said the 2016 working group report.

Creel said the Calgary-based railway had by September 2015 spent more than C$230 million to build a laboratory, establish a test track and taken other efforts to install a system. More recent industry estimates peg the cost at $375 million.

Canadian National Railway said it spent $400 million this year to install “the still-evolving technology” and will spend US$1.2 billion to fully implement it across its U.S. network by 2020.

“Canada’s railways are among the safest in the world and CN remains committed to working together with government and industry partners to identify and investigate opportunities to further enhance rail safety across Canada,” spokesman Patrick Waldron wrote in an email.

He added that could include the development of new technologies and use locomotive voice and video recorders to investigate accidents. Provisions requiring their installation are part of legislation under review by the Canadian Senate.

Via Rail said it’s developing a system called GPS Train to prevent missed and misread signals and to prevent overspeed incidents caused by operator error, especially in bad weather conditions, and that it continues to work to improve its safety performance

“Via is supportive of any technology that improves safety,” said spokeswoman Mariam Diaby in an email.