Shoddy cladding may be the culprit behind London's Grenfell Tower fire, which left 79 dead or missing. While the U.K. doesn't mandate fire-retardant material, Canadian regulations prevent the issue—at least in theory 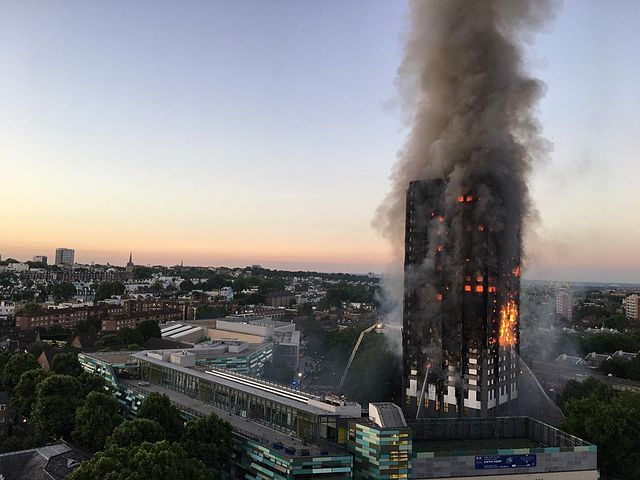 last week’s fire in the 24-storey tower has killed dozens. Police said June 19 that 79 are dead or missing. PHOTO: Natalie Oxford/CC BY 4.0

TORONTO—Canadian building standards should theoretically prevent the sort of blaze that engulfed a London apartment tower last week, but at least one expert says flouting those regulations can put people in serious danger.

Exterior panelling known as cladding that was recently installed on the 24-storey Grenfell Tower is increasingly being cited as a factor in the blaze that killed dozens. Police said June 19 there are 79 people dead or missing after the blaze.

British engineering experts have begun speculating that the cladding was constructed of inferior, combustible materials that helped spread the fire rapidly up the building.

Engineers say cladding is a common and often necessary feature of buildings that is used to prevent moisture from seeping into the main structure.

Canadian regulations clearly spell out rules for cladding that can be used on buildings of at least four storeys in height and state that the material needs a fire rating of at least one to two hours—a window that would theoretically allow most people ample time to escape a blaze.

But Doug Perovic, a forensic engineer who teaches at the University of Toronto, says trouble arises when builders try to cut costs by resorting to cheaper materials that don’t come up to code.

Most cladding, he explained, is composed of a metal skin, such as aluminum, and a core material that usually dictates its overall fire resistance.

“There are polymers, plastics out there that don’t burn,” he said in a telephone interview. “They’re going to be more expensive, and it can form the core of that kind of composite cladding. But if someone’s cutting corners and getting the cheaper stuff, which seems to happen in a number of these fires, you’ve got a potential problem.”

Media reports in the U.K. suggest that may have been the case in the Grenfell fire.

The Guardian reported that when the building was refurbished last year, it was finished with a cheaper form of aluminum composite cladding that did not contain fire-resistant material.

The Guardian also reported that the U.K. has no regulations requiring the use of fire-retardant material in cladding used on the outside of tower blocks and schools.

Such is not the case in Canada, according to the national building code.

All exterior cladding materials for buildings higher than four storeys must be tested for fire resistance and comply with strict standards.

The Canadian Commission on Building and Fire Codes, part of the National Research Council, updated its regulations as recently as 2015. The council did not respond to request for comment.

Leaving cladding off buildings altogether is not widely viewed as an option, since it can fulfil a key function by acting as a rain screen. Papers posted to the NRC website as far back as 1999 discuss the effectiveness of the “rain screen principle” and spell out how it works.

Cladding is affixed to the outsides of buildings with a pocket of air between them. Working in tandem, the air barrier and the cladding help prevent moisture from seeping into the buildings.

“The cladding provides the first line of defence in the rain screen design, and as such bears the full brunt of the weather,” reads one paper.

The air barrier between the cladding and the building, which some British fire safety experts have speculated helped the flames travel faster up the Grenfell Tower, is considered an integral part of a sound rain screen design according to the NRC report and Perovic.

Perovic said the use of cladding has been widespread for more than a decade, adding that requirements for effective rain screening vary based on the region.

The Grenfell Tower incident is not the only instance in which lower-quality materials are believed to have led to disaster.

A 63-storey luxury hotel in Dubai with problematic cladding went up in flames on New Year’s Eve 2015, injuring a handful of people. A blaze at a building in Melbourne, Australia, in 2014 was later directly linked to the type of combustible cladding in place on the structure and triggered an audit of many of the city’s high rises.

—with files from the Associated Press.