Trump pressed the pause button on methane cuts in the U.S. after taking office; despite the longer timeline, the Canadian oilpatch says it's still committed to the cuts 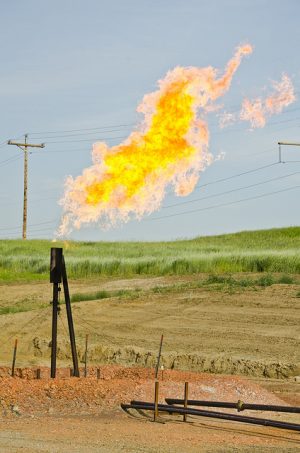 An Obama-era accord put methane emissions in both Canada and the U.S. in the regulatory crosshairs. PHOTO: Tim Evanson/Flickr

OTTAWA—Canada is going to put off its plan to regulate cuts to methane emissions in the oil and gas sector for three years.

The move comes less than a month after U.S. President Donald Trump signed an executive order that hits the pause button on matching American commitments to methane cuts—and the timing is no coincidence.

Canada can’t ignore the U.S. if it wants to preserve the competitiveness of its oil and gas industry and commitments to sustainable energy, Natural Resources Minister Jim Carr told The Canadian Press in an interview at the end of last week.

“We have to keep a very close eye on what our American partners do because the economies are so interlinked,” he said.

In January 2015, then-U.S. President Barack Obama announced a plan to slash methane emissions from the U.S. oil and gas sector between 40 and 45 per cent over 2012 levels by 2025. Canada agreed to match that in March 2016, when Prime Minister Justin Trudeau had a state visit to Washington.

The United States issued initial regulatory standards in May 2016 and issued new reporting requirements for companies to submit data on equipment and operations to better track methane emissions.

Then the government changed.

Canada was to issue its first regulations this spring and they were to be implemented between 2018 and 2020.

Marie-Pascale Des Rosiers, a spokeswoman for Environment Minister Catherine McKenna, confirmed this week the government has agreed to postpone the regulations several years. Now they won’t begin until 2020 and won’t be fully in place until 2023.

The government is, however, sticking with its commitment to cut methane emissions 40 to 45 per cent over 2012 levels by 2025.

“This change to the start date will allow industry more time to make changes to operations, and to budget the capital needed,” Des Rosiers said.

“The shifted timing will also allow provinces time to finalize their provincial methane regulations for discussions on equivalency.”

Vicky Ballance, director of climate and innovation for the Canadian Association of Petroleum Producers, said her organization’s biggest concerns were about giving industry the time to meet the requirements.

“We are still 100 per cent committed to meeting that target,” notwithstanding what happens in the U.S., Ballance said.

McKenna was in California this week on a trade mission and climate change industry tour. She told a conference call Thursday that the decision was the result of listening to industry in a “smart and thoughtful way.”

“We are absolutely steadfast in reducing emissions in the oil and gas sector including methane,” said McKenna.

Canada actually has to play catch up with state-level regulations on methane emissions, said McKenna.

That is one reason environmental experts are disappointed in the regulatory delay.

Dale Marshall, national program manager of Environmental Defence, said Friday he is angry the regulations are being pushed back—especially if it is because of a U.S. decision to abandon their targets.

“Deciding that we are going to tie our boat, tie our wagon to the Trump administration on climate change is crazy,” he said. “This is the one measure that the oil and gas sector faces in the pan Canadian framework.”