Natural Resources Minister Amarjeet Sohi called the report an "important milestone for ... getting this project built the right way" 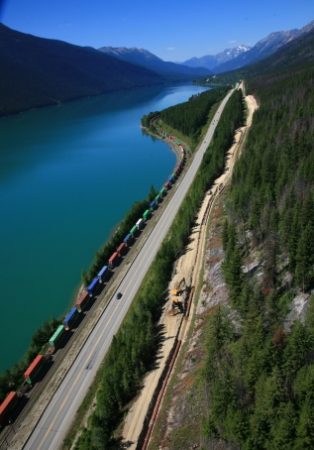 CALGARY—Battle lines over the Trans Mountain pipeline expansion were already being redrawn Friday after the National Energy Board gave its conditional endorsement to the project.

It also conceded that the environment would be significantly harmed in the “unlikely” event of an oil spill from a tanker.

“While these effects weighed heavily in the NEB’s reconsideration of project-related marine shipping, the NEB recommends that the government of Canada find that they can be justified in the circumstances in light of the considerable benefits of the project and measures to mitigate the effects,” Robert Steedman, the energy board’s chief environment officer, said as the decision was announced in Calgary.

He said the benefits include new markets for Canadian oil, job creation, direct spending on pipeline materials and “considerable revenue” to various levels of government.

Alberta has been fighting hard for the expansion which would allow more oil to be shipped to coastal ports and from there to more lucrative overseas markets.

“Despite the obstacles and knowing that we have a great deal of work to do ahead, I am still optimistic today,” Premier Rachel Notley said.

“A lot of work had already been underway with respect to the project itself,” she said. “If the federal government approves the project in a reasonable time, there should be very little delay between that and when shovels get back in the ground.”

Indigenous and environmental groups criticized the decision they said came out of a flawed and fast-tracked reconsideration ordered by the Federal Appeal Court last summer. They said they will continue to fight the project in the courts and on the streets.

The Appeal Court said in its August ruling that the NEB had not properly considered an expanded pipeline’s impact on marine life nor had the federal government meaningfully consulted with Indigenous groups.

The energy regulator included 156 conditions in its go-ahead and made 16 new recommendations to the federal government. They are outside the board’s power to enact, but could be put in place by Ottawa, Steedman said.

The suggestions include measures to offset increased underwater noise and increased risks that a ship could hit a whale, to improve spill response and to reduce emissions from tankers.

In Ottawa, Natural Resources Minister Amarjeet Sohi called the report an “important milestone for … getting this project built the right way.”

He said he is hopeful remaining Indigenous consultations—there are 32 communities still waiting for meetings—can wrap up in time for the federal cabinet to make a decision before the end of May. It has 90 days to do so, but can decide to extend that if it needs more time.

“It provides specific and achievable conditions under which we must operate to ensure, if approved, the project will protect the marine and terrestrial environment and communities,” he said in a statement.

Anderson stayed with Trans Mountain after Kinder Morgan sold the pipeline to the federal government for $4.5 billion last year.

At a Vancouver news conference, Grand Chief Stewart Phillip of the Union of British Columbia Indian Chiefs said it appears that “jobs are worth more than justice” in Canada.

He said there will be further lawsuits and demonstrations against the project and opponents will be speaking with their legal advisers about next steps.

Lawsuits may not be filed until after the cabinet makes its final decision, said Eugene Kung, a lawyer with West Coast Environmental Law.

The energy board made many of the same mistakes in its reconsideration that it made the first time, he added.

“The fix was in on this from the start,” said Kung, who cited the review’s limited scope and failure to consider salmon-spawning streams that provide food for killer whales.

“If it’s a vote between the tankers and the orcas, I vote for the orcas,” said Chief Judy Wilson of the Union of B.C. Indian Chiefs.

Leaders of the Canadian Association of Petroleum Producers and the Canadian Energy Pipeline Association urged Ottawa to quickly approve the expansion, which would triple the capacity of an existing line between Edmonton and Burnaby, B.C., to 890,000 barrels a day.

“It’s absolutely critical this project gets under construction as soon as is practicable,” said CEO Tim McMillan of the petroleum producers.

Pipeline association CEO Chris Bloomer said the NEB’s recognition of the pipelines benefits should weigh in favour of its acceptance.

Oilsands producer Cenovus Energy was pleased with the decision. Spokesman Brett Harris said lack of export pipeline capacity means Canadian companies are missing out of billions of dollars in revenue.

—With files from Lauren Krugel in Calgary, Laura Kane in Vancouver and Mia Rabson in Ottawa.