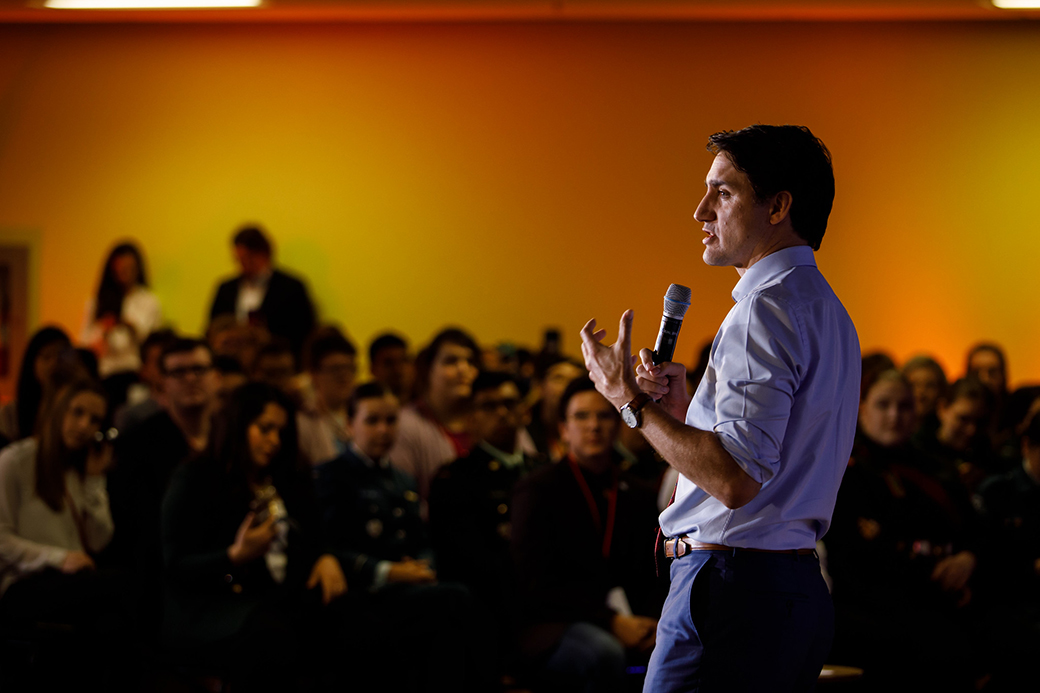 OTTAWA — Canada is closing its borders to most foreign nationals except Americans and is barring anyone, including Canadian citizens, with symptoms of the novel coronavirus from boarding flights to this country, Prime Minister Justin Trudeau said March 16.

The measures come after days of complaints from provincial and municipal governments that travellers to Canada were not being given proper warnings to go into isolation, and not being screened well for symptoms of COVID-19.

Trudeau said the government’s response to the virus is changing in real time on the advice of public-health experts and Canadians should expect additional measures before the crisis ends.

“As the virus continues its spread we’ve decided to take increasingly aggressive steps to keep you and your family safe,” Trudeau said March 16 outside his Ottawa home.

Trudeau remained in self-isolation because his wife, Sophie Gregoire Trudeau, tested positive for COVID-19 last week and is recovering. He chaired a cabinet meeting from afar March 15, where the latest decisions were made, and held calls March 16 with G7 leaders to discuss Canada’s ongoing response and attempt international co-operation on the virus that has now killed more than 6,500 people worldwide.

Canada’s chief public health officer Dr. Theresa Tam said the rate of infection in Canada is increasing and the effort to slow the spread of the virus to give health systems a fighting chance to be able to treat it must be heightened immediately.

“We are in a fairly critical period,” Tam said.

Those with the virus typically experience mild or moderate symptoms, such as fever and cough.

The vast majority recover. But for some, including Canadians aged 65 and over and those with compromised immune systems or pre-existing conditions, the illness can be much more severe. The government’s goal is to keep the number of severe cases down to a level hospitals and doctors can handle.

British Columbia reported three more deaths from COVID-19, all residents of the same North Vancouver care home that saw Canada’s first death a week ago. Across the country the number of confirmed cases is now close to 400, with new confirmed cases in many provinces including 32 in Ontario and 30 in British Columbia at mid-day. The number has nearly doubled since Friday.

Tam said the critical element is how many of the new cases were not linked to recent travel.

The country is in the midst of an unprecedented slowdown, with schools and public facilities closing, retailers and restaurants temporarily shutting down or limiting services, and business leaders urging all companies to allow as many workers as possible to work from home. Tam said Canadians should not gather in groups with more than 50 people and should stay home entirely as much as possible.

Trudeau is urging Canadians who are abroad to come home immediately, and will set up a fund to help them do so if they find the cost out of their reach.

Canada’s border closure takes effect March 18 for anyone who is not a Canadian citizen, a U.S. citizen, or a Canadian permanent resident, with some exceptions including diplomats and airline crews. Airlines will be required to screen all passengers for signs of the virus and deny boarding to anyone showing symptoms. Overseas flights will be funnelled to just four airports in Toronto, Montreal, Vancouver and Calgary to allow the Canada Border Services Agency to better screen arrivals and ensure they are getting information that they are to self-isolate for 14 days.

Deputy Prime Minister Chrystia Freeland said she is proud of how Canada is coming together as a country to try to slow the spread of this virus but warned the worst is yet to come.

“What the experts are telling us is that this situation will get worse before it gets better,” she said, in a briefing from Parliament Hill, which she said will become a daily occurrence.

Some provinces, including British Columbia, wanted Canada to include Americans in the border closure, but Freeland said that decision is being reviewed and debated constantly, given issues such as the need for food and other supplies to flow across the border. What measures are taken, she said, need to be thought through.

She pointed out, however, that Canada has also asked people to limit non-essential travel, and that all incoming travellers from the U.S. are being asked to self-isolate for 14 days.

“Self-isolation for 14 days in Canada. That, I don’t consider to be something that a tourist would like to do for a holiday,” she said.

Trudeau is promising additional measures to help workers later this week. Ontario Premier Doug Ford March 16 said his government will table emergency legislation to ensure job security for anyone who can’t work because of COVID-19, including the need to quarantine, self-isolate or look after kids who can’t go to school.