November 28, 2016   by Raf Casert And Jamey Keaten, The Associated Press 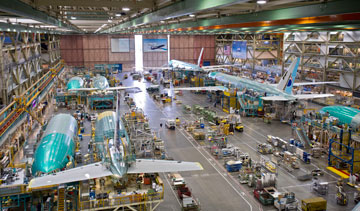 Boeing produces its 777 on a moving assembly line in Everett, Wash. PHOTO Boeing

GENEVA—A World Trade Organization panel on Nov. 28 ruled that Washington state offered billions in illegal tax breaks to plane maker Boeing, and that the U.S. government must take action to end the plans within months.

The European Union, which backs Boeing’s EU-based rival, Airbus, claimed it as a landmark victory in the longstanding battle between the two companies that dominate the global market for airplanes.

The ruling is but a part of a wider squabble involving accusations between the U.S. government and the 28-nation EU over support for Boeing and Airbus dating back to 2004.

Monday’s decision found that the support Washington state promised to give Boeing from 2024 to 2040 amounted to “prohibited” subsidies. The support offered by Washington came on condition that Boeing keeps the production of the wings of the wide-bodied 777x plane in the state, excluding foreign competition.

Boeing has extensive plants around Seattle and the EU says the subsidies would have amounted to $8.7 billion. EU Trade Commissioner Cecilia Malmstrom said the WTO ruled against $5.7 billion of the measures.

The case could have some implications for President-elect Donald Trump’s ambitions to support U.S. business first and foremost. Rejecting some of the EU claims, the WTO found that only one of seven tax incentives provided by Washington state amounted to illegal subsidies for wings for the wide-body jet. In essence, the “prohibited subsidy” involved the reduction of business tax rate on the condition that the wings were produced domestically within the United States.

Malmstrom called Monday’s ruling “an important victory for the EU and its aircraft industry.”

“We expect the U.S. to respect the rules, uphold fair competition, and withdraw these subsidies without any delay,” Malmstrom said in a statement.

Airbus had already confidently predicted victory at the WTO over the Washington state tax incentives, saying during the latest tit-for-tat showdown in September that the alleged subsidies would “almost certainly be condemned as illegal.” Airbus had made that assertion after the trade body had found that the EU had provided billions of dollars of improper subsidies to the European plane maker.